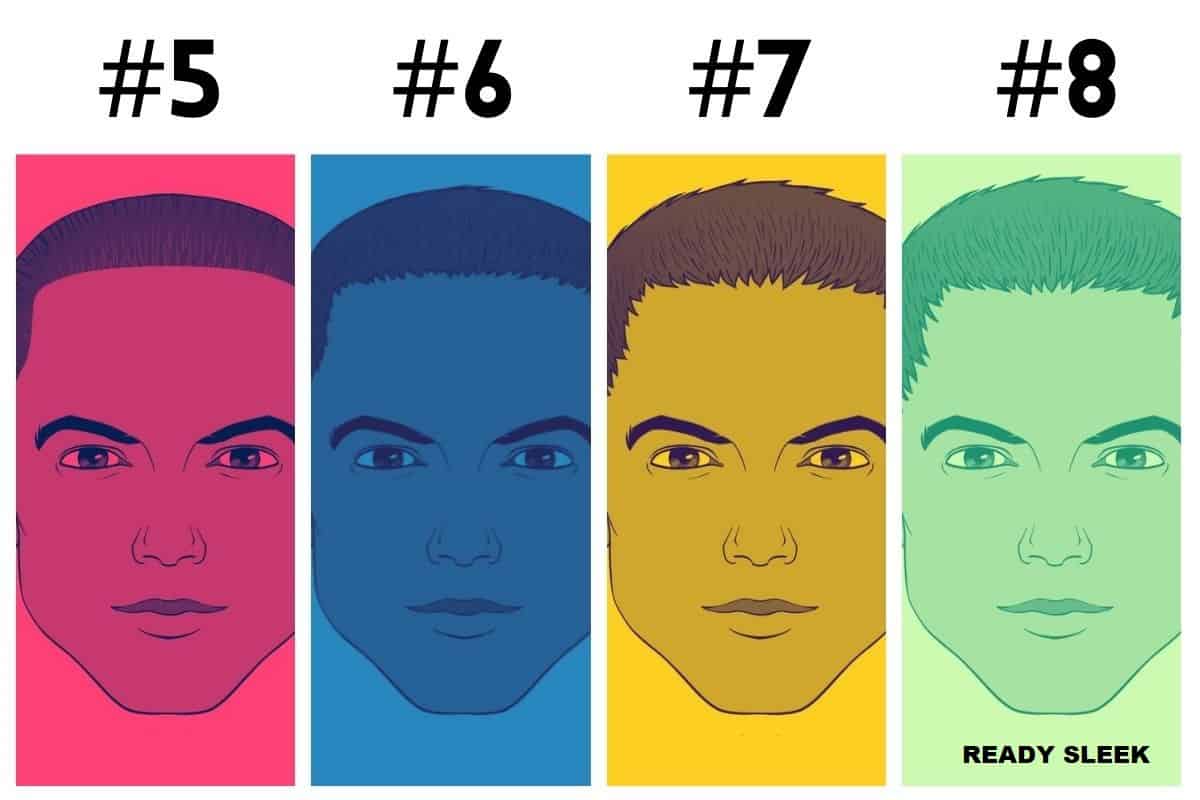 While “buzz cut” usually brings up images of ultra-short and clean-cut hairstyles, longer buzz cut lengths are still in style and important to know about.

More specifically, you need to know exactly how short each of these longer clipper guards (#5, #6, #7, #8) actually trim.

It’ll save you from some pretty serious DIY buzz cut mistakes, or simply just allow you to confidently tell your barber exactly what you want.

Clipper guards can be tricky to properly understand.

Confusing the guard number for the number of millimeters it trims down to is the commonest problem.

But in general, men just have a hard time predicting what length each of these guards will trim down to.

What Is A Buzz Cut?

The term “buzz cut” can refer to several different styles. A traditional, classic buzz cut is trimmed evenly all the way around using a clipper.

A “crew cut” is a type of buzz cut where the hair is left longer on top. The longest hair is at the front and it gets shorter as you go backward to the shortest hair at the crown.

A “butch cut” is a similar to the crew cut but the hair on top is more evenly cut (i.e less tapered). Finally, an “Ivy League” is another type of buzz cut and simply looks like a longer version of a crew cut.

What all of these variations have in common is that they’re all short and all very reliant on the use of a hair clipper to different extents.

Buzz cuts such as the number 0 or number 1 are very short and look similar to a shaved head. With these lengths, you’re quite limited in terms of styling.

But the beauty of the longer clipper guard lengths we’re talking about today is that you have enough length to style variations of the buzz cut like crew cuts and butch cuts.

After buzzing the hair down with clippers, you may also have enough length on top to produce other simple styles such as very short faux hawks or quiffs.

As always, buzz cut styles go great with facial hair such as goatees, stubble, and mustaches.

But now, let’s get to the fun part.

Here’s what each of the longer clipper guards will allow you to trim and style.

The number 5 buzz cut leaves ⅝ of an inch (16mm) of hair. It’s an ideal choice for men who are drawn toward short styles but still want the option of being able to style it in subtle ways.

Shorter buzz cuts can be tricky to shape, comb, quiff up, etc. With a number 5, you may have just enough there to form a very short quiff.

It could be tricky to style, however, and you may be better off waiting until it reaches a longer buzz cut length (or just go for one of them to begin with).

It’s also a great length for a “high and tight”. A high and tight hairstyle consists of longer hair on top with a short back and sides.

In general, the number 5 is a great option for men who want a professional-looking style. One that’s easy to manage, like shorter buzz cuts, but also don’t make them appear too bare-scalped.

The number 6 buzz cut leaves ¾ of an inch (19mm) of hair. It looks fuller than shorter buzz cut lengths and gives you several simple styling options.

With a number 6 buzz cut, you should have enough length to form a very short quiff, a small faux hawk at the front.

At this point, the average passerby probably wouldn’t immediately label your hairstyle a “buzz cut”.

It looks less like a traditional, clean-cut buzz cut and more like a regular men’s haircut. This may be exactly what you’re looking for.

Once again, the “high and tight” would be a great option with a number 6 on top.

Tapered or faded sides and back also look great with a #6 on top; currently a popular and very modern choice.

It isn’t quite long enough to style into anything like a side-swept quiff, a comb over, or an undercut.

But it does give you options and it would be worth using a small amount of pomade to see what you’re able to achieve.

Not every man’s number 6 buzz cut is the same. Some men have a hair texture that’s easier to style, even at these very short lengths.

Others may struggle. It’s worth experimenting to see what you’re able to do with a bit of product.

The Number 7 Buzz Cut is ⅞ of an inch (22mm) long. At this length, your style options start to get broader, with crew cuts and faux hawks becoming more easily achievable.

You will see more benefit from using products and even a blow dryer when styling.

When you trim a buzz cut of this length, you’ve got enough hair on top to really experiment with “longer” buzz cut variations such as crew cuts.

As I mentioned earlier, crew cuts consist of longer hair at the frontal hairline that gradually tapers shorter as go back toward the crown.

A number 7 length at the front is great for this because it’s long enough to make this transition from long to short more noticeable.

The sides and back are clipped down shorter. Sometimes, they’re trimmed down very short (down to the skin) like with the “high and tight”.

Once again, the number 7 length on top is fantastic because the contrast between this longer hair on top and the shorter hair at the sides and back is more obvious and striking.

Although it’s still achievable with shorter buzz cut lengths, it probably won’t be as impressive.

One potential downside of the number 7 buzz cut is that it’s clearly going to be a little harder to maintain than the ultra-short buzz cuts you may be used to seeing.

You may get away with not using any styling product, but it’s generally better to in order to give it some texture and life.

It’s also important to keep it clean to avoid greasiness and clumping of the hair, as hair thinning can look more obvious than it would with shorter buzz cut lengths.

Buzz cuts are generally great for receding hairlines, as they often make them look less noticeable.

But this is generally more true with shorter buzz cuts like the number 2 or even the number 3. With the number 7, the hair is long enough for that benefit to be less noticeable.

To sum that all up, at this length, you’ve really got to weigh up the upsides and downsides of a longer buzz cut.

The Number 8 buzz cut is 1 inch (25mm) long. It’s a good choice for men looking for flexibility and styling options, but does have increased maintenance requirements.

Once again, crew cuts, faux hawks, and high-and-tights are great options with a number 8 on top.

Although you could go for an even number 8 all the way around, it’ll generally look too full at the sides and back. This isn’t ideal, especially for men with shorter or rounder faces.

The same would be true of the number 7.

But because of these “fancier” trimming requirements, longer buzz cut styles are generally harder to DIY.

Don’t get me wrong – it isn’t that hard to taper the sides and back and you’ll probably do a good job of it with practice. But you’ll almost always get a better outcome by visiting a professional.

There you have it. A quick burst of information and inspiration.

It’s important to get to grips with what these buzz cut lengths look like because it seriously reduces the risk of mistakes being made.

This would be true whether you were doing it yourself, or asking a barber to do it for you. Misunderstandings between barbers and their clients are very common when it comes to clipper guard lengths.

Having this basic knowledge on board will make communication with your barber so much more effective. 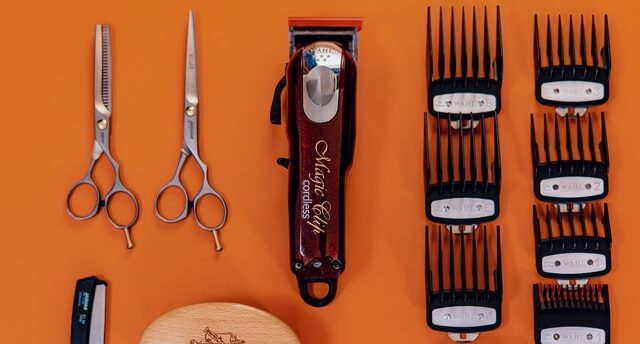 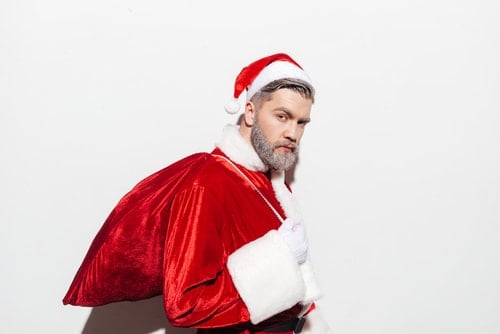