Fade Vs No Fade Vs Blowout Vs Blend [Pic Comparison]

Fade terminology – often confusing and sometimes downright made up. It’s important to separate fact from fiction so you know exactly what you’re talking about when you’re telling the barber what you want.

So, without further ado – let’s get to it.

Fade Vs No Fade

This is the simplest and easiest to understand comparison out of all of them.

Essentially, what you’re choosing between is a tapered or faded appearance at the sides and back or the absence of that effect.

Many, many modern hairstyles incorporate a fade – they’re very much in trend.

These could be anything from a subtle 2 fade into a #4, or a full-on high skin fade.

It really depends on how noticeable, obvious, and in-your-face you want it to be.

Ultimately, the gradual and smooth blend of lengths at the sides and back is what gives the fade its characteristic look.

Men who go for “no fade” will have all of the hair on the sides and back the same length with no tapering.

It has a more understated and classic appearance to it when compared to the more modern fade styles.

When asking for a fade, you need to inform the barber of the following three things:

Let’s talk about each of them in turn.

It can be a “low fade” – starting around an inch above the ear. Or a “high fade”, starting at around the level of the temples.

Or a “mid fade” – starting somewhere in between those two points.

You’ll also need to tell the barber how short you want the fade to actually be. Skin fades are the shortest you can get, as the shortest length is literally shaved down to skin before it gradually increases in length as you go up.

Finally, you’ll need to let the barber know what you want to do with the hair on top. This could be literally anything ranging from a pompadour to a slick back.

So, if you do choose “fade” over “no fade”, now you know exactly what your barber will need to hear from you to get you the results you want.

But let’s talk about how you make the decision between fade vs no fade in the first place.

When choosing between a fade and having no fade at all, consider the following points:

As I mentioned, having the sides and back faded will always bring about a modern aesthetic.

This doesn’t appeal to all men – there are plenty who prefer a more traditional look instead.

For these men, going for a no fade style may be preferable.

The “short back/sides” is a good example of this, where the sides aren’t necessarily faded and are simply shorter than the hair on top.

Having the sides shorter will still have a sleek and slimming effect on the face, despite them not being faded.

Fades often draw attention due to the eye-catching nature of the effect.

Although this isn’t as true as it used to be given how popular fades are at the moment, it’ll still be more eye-catching than a no fade style.

The higher the fade is, the more eye-catching and attention-grabbing it’ll be.

Although this is a large part of its appeal, with many men choosing to go for fade over no fade due to its eye-catching nature, it doesn’t appeal to everyone.

Some men do prefer a more subtle style without any fades or obvious tapers. They’re happy with a more understated aesthetic.

So, when choosing between going for a fade or no fade, consider how attention-grabbing you want your hair to be.

Here’s the most important thing to note:

The most striking feature of the blowout is how the sides are often faded short themselves, before bursting out into a high volume style as you go up to the top.

Very little at the bottom, with a whole lot of hair at the top. It leads to a pretty unique look, often called the “Brooklyn blowout”.

The “blowout” part of it is sometimes produced using a blow dryer to really get some serious volume and height.

It doesn’t make much sense comparing the terms “fade” and “blowout”, although this is commonly done.

It’s important not to confuse styles and features of styles.

Any style you can think of – whether it’s a pompadour, quiff, slicked back, etc – can include faded sides.

The same goes for a blowout.

This leads me to the next inaccurate comparison often made. Let’s clear up the confusion.

Fade Vs Blend: What’s The Difference?

There is no difference between a “fade” and a “blend”. They both refer to the same feature of a very gradual increase in length as you go up the sides and back with no harsh lines.

The blurred effect that results can be called either of those two terms.

Having said that, the term “fade” is much more commonly used than a “blend”.

The term “blend” is more likely to be used to describe the technique used to produce a fade.

Here’s an example used in a sentence:

So, the feature is the “fade”, while the technique used to produce that feature was blending the different lengths together seamlessly.

It may not seem like that big of a deal, but it’s important to get this distinction right.

Telling your barber you want a “blend” won’t mean very much at all. You aren’t telling them what sort of fade you want, how high you want it, or how short you want it to start out.

So, next time you visit the barber, ask for a “fade” and not a “blend”. In addition, tell them exactly what you want so you can make sure you get the result you want.

Fades aren’t going anywhere anytime soon. You may already have one. Alternatively, you may strongly consider getting one someday.

Either way – it’s important to know what you want well in advance of your appointment to avoid disappointment.

Use photos and take your time. Don’t rush your description or your request, especially the first time you ask for it.

Fade Vs Short Back And Sides: Differences [With Pics]
← Read Last Post 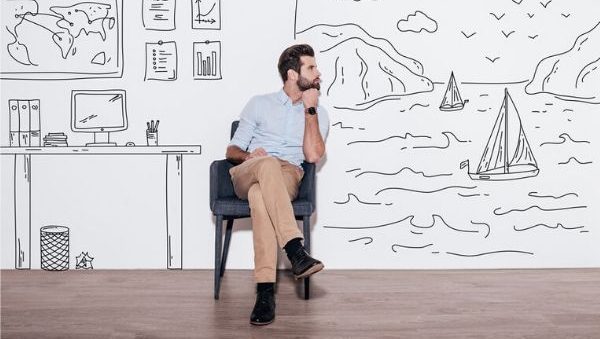 Are Chinos Business Casual? 8 Tips To Get It Right
Read Next Post →
Comments are closed.