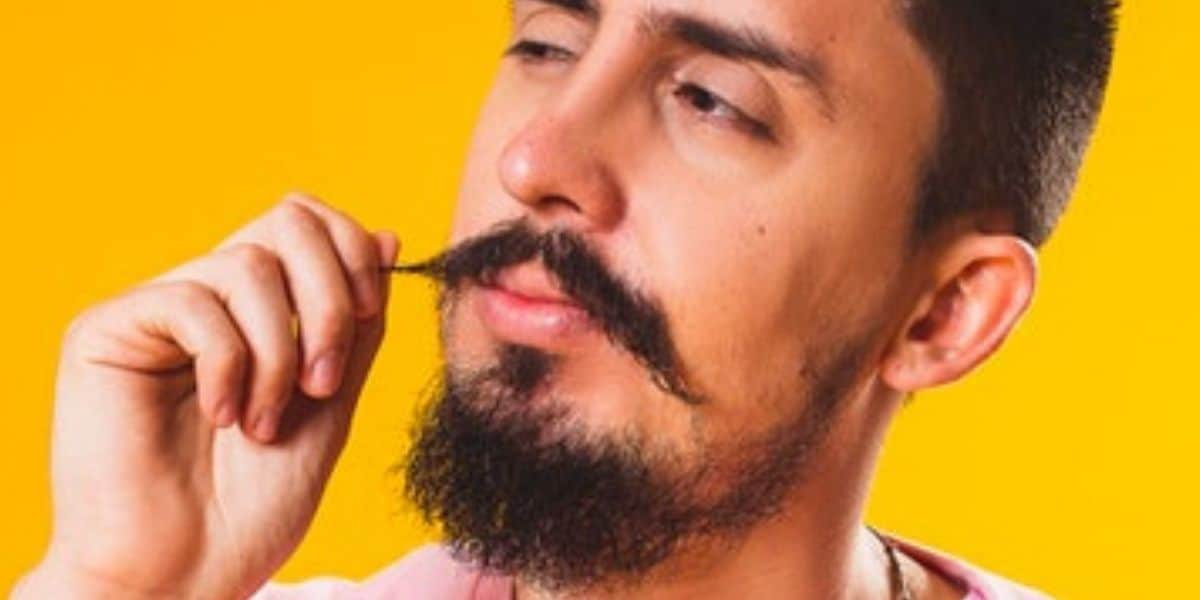 Triangle goatees have adorned the chins of many great men in centuries gone by. Their benefits are many – but does it refer to a specific style?

It’s best to think of “triangle goatees” as more of a genre. An umbrella term that refers to several different goatee styles where the chin beard is sculpted into a 3-sided beast.

They can be long, short, wide, or narrow. It really doesn’t matter. The benefits of triangle-shaped goatees are the same, no matter what the specifics are.

This article is going to talk through some of the greatest triangular goatees you can try out for yourself, with pictures and all. Then, I’ll go through some of their universal, key benefits, as well as some additional grooming tips.

Here’s a rundown of some great ones you can feel free to try out. They may have the same shape, but they can differ in length, width, character, and nuance.

It’s important to define a “goatee” before we go any further. It refers to any style where there is hair on the chin but not on the cheeks. The style may or may not incorporate a mustache.

Now that that’s out of the way, let’s begin this celebration of pointedness.

A traditional goatee simply refers to a tuft of hair on the chin. It’s a small, simple chunk of hair that won’t exist anywhere else on the face. There is no mustache, and of course, there’s certainly no cheek hair.

It’s called the “traditional” or the “classic” because back in the earlier half of the 20th century, this was the only definition of a “goatee”. The presence of a mustache wouldn’t be true to this original definition.

Things have changed, however. The modern definition now frequently incorporates a mustache. But there are still those who prefer to adhere to the purist concept of the goatee.

A triangular, traditional goatee is certainly one to try out. It may not suit all face shapes, but those looking to elongate their face using the minimal amount of facial hair may want to give this a go.

Unsurprisingly, it’s easy to maintain and can look very sleek. However, it isn’t the most modern facial hairstyle and can look out of place if not styled appropriately. Having said that, you’ll still find plenty of ultra-current celebs and athletes wearing this style today.

The Chin Puff is somewhat similar to the Traditional. However, it usually extends upward from the top of the chin to the lower lip, blending seamlessly with the soul patch as it does so.

Because of this, it can occasionally look like a large, long soul patch. However, it can look mighty sophisticated when trimmed neatly. It’s an easy goatee to trim into a triangular shape as well.

It was particularly popular among the beatnik generation of the 1940s, and perhaps because of this usually does give off an artistic vibe.

Be warned – it’s incredibly fun to play with. Having said that, most chin beards are.

An extended goatee is a Full Goatee style consisting of a connected chin beard and mustache. What separates it from a typical Full Goatee is the fact that the bottom edges tail backward partially along the length of the jawline.

Its main benefit is that it does provide some contouring and definition to the jawline. Not as much as the goatee with chinstrap, but in a more subtle way.

The tip of the goatee can easily be sculpted into a point to create a glorious triangular shape if you have enough length. This can look very sophisticated indeed.

Although the chin beard and mustache are usually connected, they don’t have to be. This is particularly important because men have disconnected goatee styles that physically can’t connect. If this refers to you, don’t worry. This style works just as well when disconnected.

Another thing to note is that with the extended goatee, the sideburns are very frequently trimmed very short.

This is quite traditional but it isn’t compulsory. It’s just another nuance you can experiment with.

If you’re looking for a simple, yet elegant triangle goatee style this one may well be for you.

As the name would suggest, this goatee style is carved into the shape of an anchor. This nautical wonder does require some trimming and edging chops, but it really isn’t as hard as you may think.

It essentially consists of a chin beard that extends very slightly along the length of the jawline on either side, as well as a soul patch that blends seamlessly into this chin beard.

Often a nice surprise, the resulting shape does resemble an anchor quite a lot.

It’s benefits are similar to those of a normal goatee. However, because it is quite unique, it does tend to draw more attention.

The traditional and full goatees are quite commonplace. It’s unlikely that you’d go a day without seeing one on the streets, no matter where in the world you happen to live.

Occasionally sculpting your goatee into something a little more ostentatious is a good way to set yourself apart from the crowd.

The style may or may not incorporate a mustache – this doesn’t matter. The main components are the chin beard and the mustache, and its defining feature is how they blend into each other.

Remember how I said that a triangular goatee can differ in terms of length? Well, this one takes that principle to the extreme.

A braided goatee can in many ways be considered a very long triangular goatee where the tip is extended to its furthest point.

Understandably, this one may look daunting. But you need not fret – it isn’t as hard as it looks. However, there are a couple of factors to consider before diving head first into this one.

For one, it does require some length. You’d certainly find it hard to braid heavy stubble, right? But you often don’t need as much length as you might think. You’d quite comfortably fit a braid into an inch or so.

Another consideration is the fact that this one does take some time. To braid a long goatee well you’ll want to wash, towel-dry, and brush it through first. Then you’ve got the practice of braiding itself which does take a few minutes even when you get good at it.

But ultimately, it’s a great way to set yourself apart. You just don’t see it as often as any of the others on this list.

Plus, it’s just a fun one to try out, even if it’s just temporarily. It’s a throwback to the Nordic legends before you – a nod to the unwavering masculinity of the Vikings.

Now that your mind is racing with style ideas, it’s worth mentioning some ways in which you could take things to the next level. Here are some grooming tips for those seeking perfection.

Neaten it up with scissors

Whenever you’re hoping to achieve a particular shape such as a triangle, it’s always a good idea to sharpen things up with scissors at the end.

Sure, the bulk of the trimming can be done with a good pair of trimmers or clippers. But to really hone in on your shape it’s always a good idea to jump in with some shears.

It’s important you don’t resort to using the first rusty pair you find in the kitchen drawer. Get yourself a decent pair of beard scissors with better grip, more precision, and shears appropriate for your specific beard length.

Once you’ve adequately trimmed the outline with an electric device, sculpt the triangle to perfection with a good-quality pair of scissors. Trust me, the outcome will be worth the added effort. Plus, scissors are also great for trimming the mustache.

Use beard balm or wax to keep things in place

When trying to achieve a pointed style, it can be hard to do this using your fingers alone. Longer beards generally need a bit of extra help. It’s not uncommon for these styles to unravel as the day progresses.

What you’ll need is a product with a level of hold. There are so many grooming products on the market today it can be quite overwhelming. When it comes to keeping styles in place, however, I like to stick to either beard balm or beard wax.

Beard balm isn’t as heavy, is more moisturizing, but still has some hold. It’s better for simpler styles and if you just want to make sure that stray hairs aren’t sticking out.

However, if you’ve got a more complex style, or simply want to make the triangle and pointedness more pronounced, beard wax may be for you. It can feel heavier and sometimes overbearing, but it keeps things in place arguably better than any other product.

OK, so you now know what they might look like and also how to hone them to perfection. Let’s talk about what makes them so great in the first place. This may influence your decision as to whether or not to adopt one.

They sculpt the chin

This one may be a key benefit of goatees in general, but it’s particularly important when it comes to triangular goatees.

There are many men who look to use facial hair to compensate for a weak chins. It’s a perfectly reasonable objective, and certainly very possible.

The tri-edged goatee is great for this because it elongates the chin in an almost exaggerated fashion. It also adds fullness and depth to the chin, making this effect even more pronounced.

Subtly altering face shape is something for which facial hair has been used for so long. It’s quite astonishing what it’s capable of doing. Never underestimate what the addition of a simple goatee can do.

They generally look noble and sophisticated

Beard pointedness has historically been associated with noblemen. The more pointed it was, the nobler the man and his pursuits.

Because of this subconscious association, this style of goatee can look very sophisticated indeed. However, it’s still usually only the case if styled and groomed appropriately. Hopefully, this article has shown you exactly how to do it.

Triangle-shaped goatees are very popular indeed. So many goatee styles ultimately do end up looking like upward or downward-facing triangles. For instance, you could argue that a typical Full Goatee style was simply an upward-facing triangle with the upper tip near the nostrils.

Bear this in mind as you go forward. Making shapes and edges more defined and pronounced a key component of beard grooming. It’s one of the main ways in which facial hair ends up looking more intentional and less accidental.

Hopefully, you’ve found this article enlightening. There are many styles out there to choose from. Categorizing them like this just helps you find what you may be looking for. 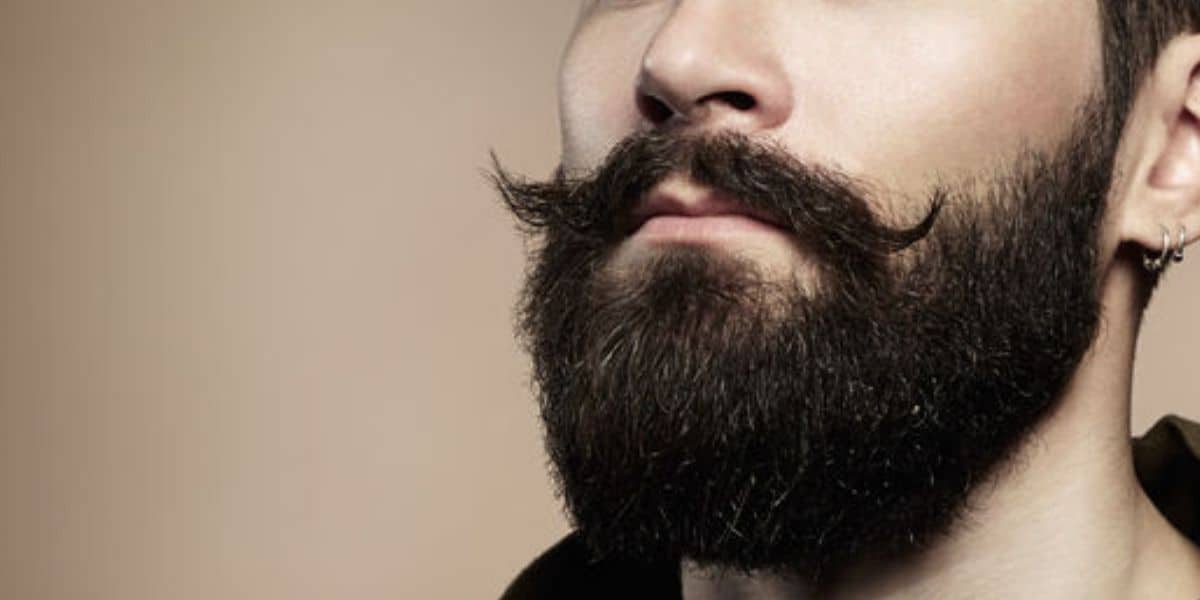 How To Trim A Long Mustache In 7 Easy Steps
Read Next Post →
Comments are closed.