Extremely popular, yet so poorly understood. The skin fade is taking the men’s hair world by storm, yet leads to disagreements between barbers and their clients worldwide.

Because people often don’t really know what they’re asking for.

Even if they know exactly what a skin fade is, they don’t know what type of skin fade they want or how high they want it to go.

That’s the confusion I’m hoping to clear up today.

After explaining exactly what a skin fade is, I’ll go on to compare skin fades with other styles.

This should help you get a much better understanding of what to ask your barber for and reduce the risk of miscommunication and disagreements.

What Exactly Is A Skin Fade?

A skin fade is a gradual transition from longer hair at the top of the sides and back down to shaved skin at the bottom.

This blend of different lengths is what gives the fade its characteristic appearance.

What makes a fade a “skin fade” is the fact that the shortest length at the bottom is literally completely shaved.

A skin fade can be “high”, where the transition from the shaved area to longer hair lengths occurs high up – usually around the temples.

It can also be “low”, where the transition point is around an inch above the ear.

Alternatively, it could also be a “mid skin fade”, where the transition point is somewhere in between.

Ultimately, when you ask your barber for a skin fade, you’ll need to specify what length you want to transition up to as you go up.

For example, “I’d like a skin fade up to a #2”. The barber will then gradually transition from shaved skin up to a #2 (6mm).

In addition, you’ll need to say how high you want the transition point of the skin fade to be.

Finally, you’ll need to let the barber know what you want to do with the hair on top. Remember, a fade is a feature and not a style in itself. A skin fade, just like any other fade, can be incorporated into any style you can think of.

So, make sure you know what you want to do with the hair on top. For example, “I’d like a low skin fade up to a #2 with a pompadour on top”.

An example of a “normal fade” would be a number 1 fade, where the shortest length at the bottom of the sides is a #1 length. It then blends into longer lengths as you go up.

Although both normal fades and skin fades are common, it’s important to know what you want before you attend the barber.

Normal fades aren’t shaved down to the skin and so they’re usually more subtle.

Just like skin fades, normal fades can be “high”, “mid”, and “low”, depending on how high the transition point of the fade is. In other words, how high up the sides and back the shortest length of the fade gets to before it starts to transition into longer lengths.

Skin fades generally take a little longer than normal fades given the fact that shaving is necessary, usually with a foil shaver.

When choosing between a skin fade and a normal fade, consider the following points:

Due to the fact that shaving is necessary, you’ll find yourself needing to “top up” a skin fade more often than you would need to with a normal fade.

After a couple of weeks, you’ll notice some short stubble cropping up over the shaved area and if you want to keep it looking clean it’ll need regular shaves.

If you’d prefer a lower-maintenance style, a normal fade may be more appropriate.

As I mentioned earlier, a normal fade would be more subtle than a skin fade because there’s less contrast between the bottom and the top.

If you’d rather a more eye-catching fade, go for a skin fade instead.

It’s also important to note that the higher the transition point of the fade, the more obvious and attention-grabbing it’ll be. The same goes for both normal fades and skin fades.

The drop fade is a feature where the fade lowers, or “drops”, as it passes behind the ear. In contrast, a skin fade is where the shortest length is shaved all the way down to the skin before transitioning up into longer lengths.

It’s important to note that a drop fade can be a skin fade, as long as the shortest length is shaved.

All that matters is that it follows the shape of a typical drop fade. This is when the fade starts at a certain point on the sides and instead of going around the back in a straight line, it drops low.

This often follows the natural curve of the head and looks very natural as a result.

Usually, drop fades are low or medium – in other words, you wouldn’t really have the transition point of a drop fade any higher than around two inches above the ear.

They tend to look quite strange as “high” fades.

A skin fade could take any shape, not necessarily the shape of a drop fade. Often, the shape of a typical skin fade usually follows a straight line around the head – one the barber then gradually blends in.

If you’re looking for a “high” fade, this would be the way to go, as a drop fade shape can look a little strange this high.

The main decision here is whether you want a normal skin fade that follows a straight line around the head, or a drop fade that “drops” as you pass the ear.

A lot of people have a “hook” like appearance at the back of the head. This is often revealed when you have a skin fade that reaches quite high up.

One way of masking this would be to go for a drop fade. Given the fact that the fade lowers around the back, you can often hide this quite well.

The way the drop fade lowers as you pass the ears is great because it seems to follow the natural curvature of the head.

In addition, it means that less of the back is exposed.

Overall, this adds up to a nice, subtle fade that doesn’t draw much attention. If you’d prefer a more subtle fade, go for a drop fade as opposed to a normal skin fade where the fade line would be higher up across the back.

Technically, the razor fade is a type of skin fade.

A skin fade could be shaved using any device (e.g foil shaver), while “razor fade” is a term used to refer to any fade shaved using a straight razor.

All skin fades have the shortest length at the bottom shaved to the skin before transitioning up into longer lengths gradually as you go up the sides and back.

They all look very neat and tight when done properly.

But given how close a straight razor can shave, razor fades look especially clean and sleek.

Although foil shavers can shave close as well, it’s very hard to beat a good ol’ fashioned straight razor when it comes to this.

It may take a little longer, but the results are often worth the wait.

In addition, the closer the shave, the longer it’ll last.

A straight razor can also be used to line up the edges. It’s such a great tool when used properly.

The question you’ve got to ask yourself is whether you want a straight razor to be used when getting your skin fade done, or whether you don’t.

Here are a couple of points to consider:

Some men hate shaving because of the soreness.

Although straight razors shouldn’t cause too much trouble when used with a proper technique, there is likely to be a bit more irritation compared with a foil shaver.

This is because you’re shaving closer to the skin.

If you’d prefer that a straight razor wasn’t used for your fade because of this, go for a regular skin fade (foil shaved) instead of a razor fade.

If you want the skin fade to look ultra-sleek, a razor fade would get you the best outcome.

Although the difference can be subtle compared with a foil shaver, if you’re looking for perfection, there’s no substitute for a barber that knows what he’s doing with a straight razor.

Fade terminology is confusing and even controversial at times.

It’s great because there are so many new styles being created, but it does mean you need to keep up to date with the lingo to make sure you get what you want.

Hopefully, this article has cleared up any confusion you may have had about these specific variations. 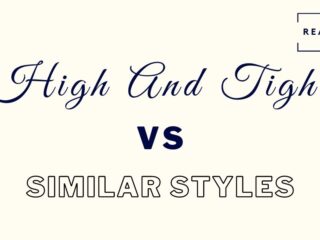 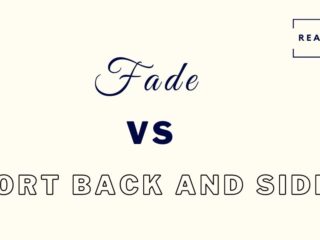 Fade Vs Short Back And Sides: Differences [With Pics]
Read Next Post →
Comments are closed.