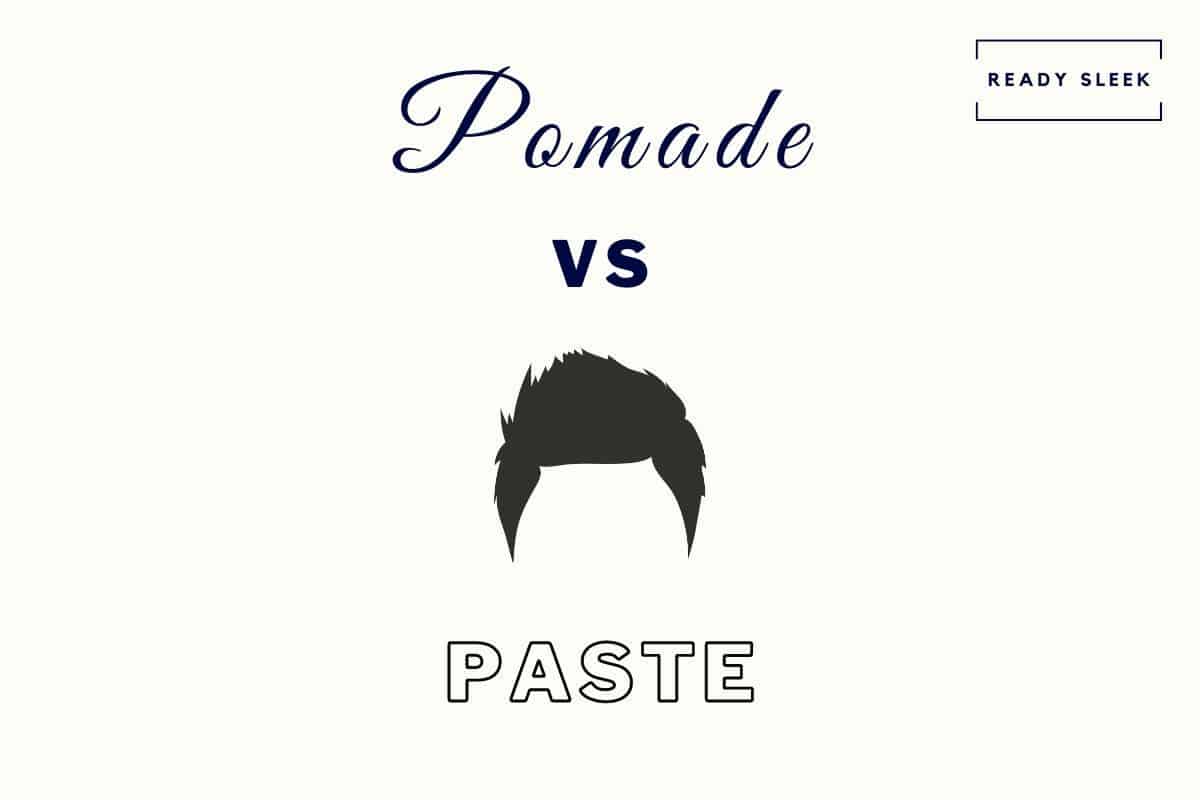 Some hair products are harder to define than others. It makes comparing them and choosing the “right” product for your particular hair tough at times. So, should you use a pomade or a paste?

That’s the core message, but I’m sure you want to dig a whole lot deeper.

What I’ve done is compared these two types of products by looking at different features that may lead you to choose one over the other. I’ll then go through specific hair types and how that should influence your decision.

In general, pomades are pretty easy to define. To get straight to the point, the main difficulty people have when comparing pomades and pastes is trying to define what a “paste” really is.

After reading this, it’ll all be a whole lot clearer.

After learning these key differences, you’ll probably find one product more appealing than the other.

Here’s a quick summary table of the key takeaway points.

Pomades can either be water-based or oil-based. Oil-based pomades usually have petroleum, petrolatum, beeswax, or paraffin as their core ingredient.

Water-based pomades have water as their core, but often with a range of other compounds including waxes (in much smaller quantities).

Pastes are usually water-based but not always.

So, with the “waxier” pastes you’ll find ingredients such as beeswax, lanolin, petrolatum, etc.

But with the more “clay-like” pastes, you’ll find ingredients such as kaolin and bentonite, together with waxy ingredients that are given less importance.

Water-based pomades are more gel-like, while oil-based pomades feel waxier, tougher, and stickier. Pastes with oilier ingredients will also feel waxier and stickier, while those with clay minerals will feel drier and grittier. But overall, you can expect a paste to feel creamier than a pomade.

It’s this creaminess that really makes a paste a paste, with additional waxiness or grittiness depending on its other included ingredients.

As you can see, the consistency of both pomades and pastes depends heavily on their ingredients.

Water-based pomades will emulsify (break down) very easily and smoothly in between your palms, just like a gel would.

Pastes should also break down quite easily given their creaminess, but the heavier the waxy ingredients or clay minerals are, the more work it’ll be to break down.

Oil-based pomades are the same; the heavier the waxy ingredients, the tougher it’ll be to emulsify. With particularly heavy ones, you may even need some heat (eg. from blow-drying) to really break it down before you can apply it smoothly.

How easy a paste or pomade is to apply and distribute through your hair will once again depend on its ingredients and consistency.

Oil-based pomades can be notoriously tricky to apply if they’re especially heavy and waxy. They can be chunky, tough, and sticky, and so can tug and pull when applied if they’re not properly broken down first.

Lighter ones won’t be as difficult, however.

Given the typical creaminess of pastes, they should distribute smoothly. That’s the beauty of it – they may have some of the grittiness of clays or the waxiness of an oil-based product, but the creaminess makes it comfortable to apply.

Think of it as taking the best features of different worlds. It has the creaminess and smoothness of a traditional styling cream, plus either the waxiness and stickiness of a hair wax/oil-based pomade or the grit of a clay.

Water-based pomades will be the easiest to apply and distribute, simply because of their gel-like consistency.

Pomades are best known for their high shine and gloss, while pastes usually produce a matte or low shine finish.

This has a big influence on the types of styles they’re used for.

The traditional glossiness of pomades is ideal for more “classic” styles such as slicked-back hair, contours, side parts, and pomps.

The matte or low shine finish of pastes is ideal for more modern and textured hairstyles where shine is less important and less desired.

It’s important to note that the heavier the waxy component of the paste, the more shine it’ll give off. But in general, you can expect most pastes to produce very little shine.

Both pomades and pastes can give varying levels of hold. It isn’t the case that one will necessarily give a stronger hold than the other.

The majority of pastes and pomades can usually be expected to produce somewhere between a medium and a heavy hold.

How pomades and pastes may differ, however, is in the type of hold they produce.

The reason for this is that they dry stiff. The water evaporates and you’re left with a stiffness to your hair, similar to what you’d expect with a gel.

Although this is great for producing a “set it and forget it” type of hold, it’s not good for restyling purposes. You won’t be able to without wetting the hair first (eg. by wet-combing).

Oil-based pomades and most pastes will produce a pliable hold that you can move throughout the day.

This is great for restyling on-the-go and is a major reason why a lot of men love them.

Pastes produce more texture in the hair than pomades do. Because of this, pastes are often used for more modern and layered hairstyles, while pomades are better for producing more definition with less texture and more gloss.

If you take a look at that classic ‘50s “greaser” movement with big pompadours and shiny slick-backs, you’ll see very little texture and a lot of definition/shine.

This is what pomades are known for.

Pastes, on the other hand, are better for those messier, more tousled, textured, and layered hairstyles that usually go hand-in-hand with a matte or low shine finish.

Having said that, pastes can give you less texture and more definition if this is what you’d prefer.

You can build texture by using brushing, combing, and heat. But you can also choose not to. Such is the versatility of hair pastes.

Both pomades and pastes can be used to build volume, but the way in which they do so is different.

Pomades aren’t known for building volume or adding fullness in the same way clays are, for instance.

In fact, pomades can actually make hair look less full and less voluminous by weighing it down and making it look shiny or greasy. This is particularly a problem for men with thin or fine hair; it makes the hair look even thinner and the hair lies flatter and closer to the scalp.

However, you only need to look at those giant ‘50s pompadours to really see how much volume can be built with pomades.

It’ll take work – blow-drying, brushing, etc. But it can be done and the volume you build will have gloss, shape, and great definition.

Pastes can also build volume and fullness, but it’s easier to do so because they aren’t usually as heavy and also have less shine.

The volume you build will be lighter and airier than the volume you’d build with a pomade. It’ll just look like it has more lift.

Plus, pastes that include clay mineral ingredients like kaolin and bentonite will make the hair itself look plumper and fuller.

To sum that all up, you can use both pomades and pastes to build volume. However, it’s usually easier to do so with a paste and the fullness you get will be lighter and have more lift.

Most pastes are water-based and so will wash out of the hair easily, with or without shampoo. Water-based pomades are exactly the same – they’re water-soluble and rinse out with ease. Oil-based pomades, on the other hand, can be tricky to wash out given their heavy waxy ingredients.

Pastes that do include relatively large proportions of wax-like substances can be harder to wash out than those with lower proportions.

But overall, it’s a pretty safe bet that it’ll be easier to wash out than an oil-based pomade.

Now that you’ve seen the main ways in which these two products differ, it’s time to see how they apply to specific types of hair.

You can put yourself in these categories and decide whether or not one product may be more suitable for your specific hair type.

As always, I split “hair types” into three categories; thickness, length, and straightness.

Pastes are more versatile than pomades when it comes to hair thickness.

Although they’re especially beneficial for men with thin hair, they’re also popular with thick-haired men looking for a matte finish and a pliable hold.

Men with particularly thick hair will need a product with a heavier hold – this could either be a pomade or a paste.

If they struggle to find a paste with a strong enough hold but still want a matte finish, they could try a clay instead; these often have even heavier holds thanks to their density, thickness, and grit.

Men with long hair may struggle to get the hold they need from both pomades and pastes. But if a heavy hold isn’t what you’re looking for and you’re simply looking to add some texture (paste) or some definition and gloss (pomade), either product would be fine for long hair.

Pastes are traditionally most used for short-to-medium length hair, where spiking, layering, or adding texture is what’s looked for.

Pomades can be used on short hair but this may be too heavy and shiny, and so might reveal too much of the scalp if the hair isn’t thick enough.

Pomades are best suited to hair that’s medium-to-long in length. Speaking more practically, hair that’s long enough to slick to the side or to the back, but not so long that it struggles to stay in place.

Both pomades and pastes can be used for curly hair with good effect. Pomades will add definition and gloss to the curls, while pastes will add layering and texture to the curls.

That’s all there is to it. Both products can be used on both curly and straight hair, so it’s best not to base your decision on the straightness of your hair.

Focus more on the thickness and length of your hair, as well as the key differences I listed earlier.

That’s fine; there are plenty of men who have both pomades and pastes in their bathroom cupboard.

But there will most likely be a lot of you who have read this and feel that one product would be more suitable for your specific hair type than the other.

That’s perfect. You’ll save yourself wasted time and money trialing the wrong one out.

If you still aren’t sure, try them both out. The products are so different that you’ll probably prefer one over the other but will then have the benefit of seeing for yourself.

Mustaches are making a big style comeback - and with good reason, as they are a classic look for men.  But mustaches can become unruly if not properly cared for as they grow out. As a result,...

It’s tough to get much shorter than this. There’s beauty in simplicity and that’s definitely true when it comes to this length. You’re about to learn everything you need to know about the 1mm...