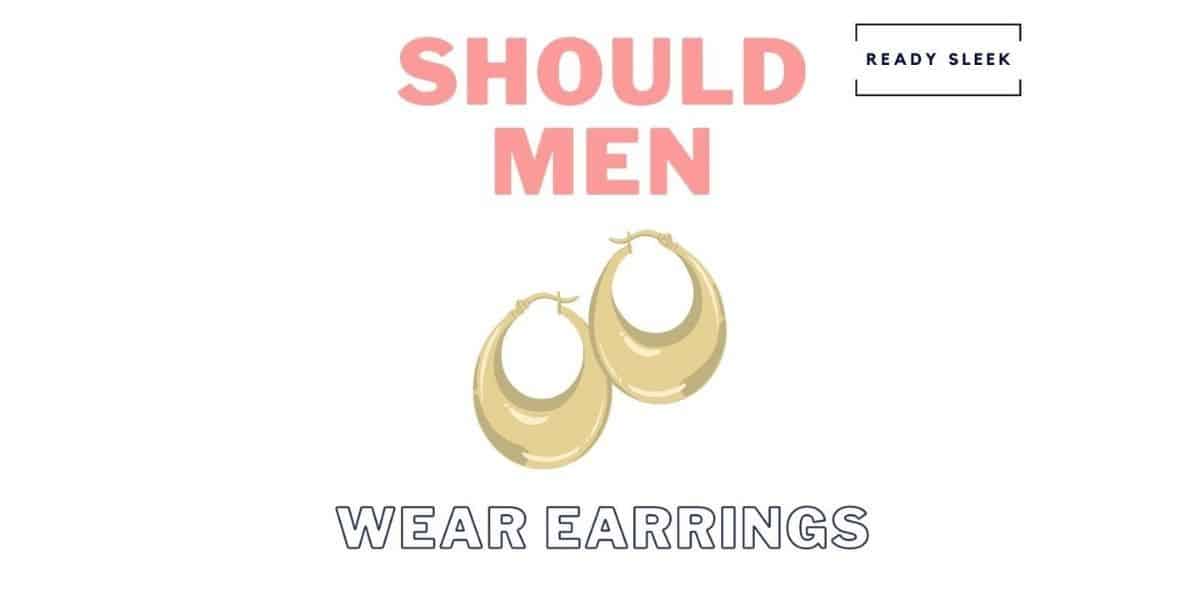 Traditionally, earrings have mostly been worn by women and they are still typically considered a female accessory in the West. However, the opposite was once true of pants – only men wore them. So, should men wear earrings?

Yes, earrings have become an accepted male fashion accessory in modern Western culture. Small and simple earrings such as a pair of studs or a single earring in one ear are generally considered more “safe” and socially acceptable.

Many workplaces, especially the more corporate ones, still view men wearing earrings as unprofessional, however.

Keep reading to learn everything you need to know about male earrings, including the best times to wear them and the most effective ways to wear them.

When Should Men Wear Earrings?

Since earrings can be formal or casual depending on how they are worn, men can technically wear earrings for just about any occasion so long as they do not violate any established dress code.

Having said that, many people have mixed feelings about men wearing earrings despite the recent trend and despite it not violating a specific dress code.

Because of this, men may want to pass on wearing earrings if they know it will reflect on them negatively or cause unnecessary drama, such as if they were at a strict relative’s wedding.

There’s definitely a generational difference to be aware of here. Chances are your grandad would find a pair of earrings on a man more unusual than your younger cousin would.

Men with longer hair can usually get away with wearing small earrings most of the time, as they are hard to spot if the ears are covered. Having said that, is there really a point in wearing them if no-one can see them?

Men should avoid wearing earrings during physical activities that might cause them to get ripped out, lost, or damaged, such as while swimming or playing close contact sports like football.

Here’s the crux of it though.

At the end of the day, fashion and style is a personal choice. The opinions of others shouldn’t form the basis of your decision-making here.

Sure, not everyone is going to love it. We’re not quite there yet. But as long as it doesn’t impact your career or your physical safety, does it really matter?

3 Tips For Men Who Wear Earrings

Overall, so long as men use earrings properly as accessories, they can effectively make any outfit pop just a little bit harder.

Thanks to the recent surge in the popularity of earrings for men, there’s a better understanding of exactly what works and what doesn’t.

Remember, you can technically wear whatever type of earrings you want. Trust me – they can get pretty adventurous.

But here are some general tips you should follow if you want to play it safe and increase the chances of wider acceptance.

1. The Smaller The Better

Men and women alike have expressed praise for men who wear earrings – so long as they wear small, subtle earrings.

Earrings like large hoops or those with complex patterns are often viewed as gaudy or obnoxious when men wear them.

Instead, small earrings like studs that come in a variety of metals are generally more appropriate, attractive, and universally accepted on men.

Things may be different twenty years from now. But these days, that’s the best way to play it safe; keep it simple.

A man’s earrings should generally try to match the metals or colors of other accessories he may be wearing.

If a man is wearing a silver watch or set of cufflinks, for example, he should try to wear silver earrings to prevent any of his accessories from clashing.

Coordinating like this is a great way to establish yourself as a man who wears earrings to compliment an overall style or aesthetic. This is as opposed to a man who just wears them in an attempt to stand out; this is usually pretty obvious when it’s seen.

In fact, the less they stand out the better. Earrings that are well coordinated with an outfit as a whole don’t draw much attention.

Men who wish to draw less attention should wear one earring instead of two, although two small studs can still look subtle.

Ultimately, this is something to experiment with.

Try both out and see which one you’d prefer.

If you’re looking to play it safe, one earring would definitely be more subtle. It’s less overbearing and doesn’t completely take over your entire look.

It’s easier to coordinate when it isn’t the main thing you’ve got going on with your outfit.

Many women feel that male earrings are attractive because they show how confident a man is in his masculinity. Some women also like male earrings since they view them as a sign of a sensitive man.

A few of these women believe that men look better when they only wear one earring, as two are not subtle enough. Again, most people only like small, subtle earrings on men.

But they appreciate this confident addition to a man’s outfit, especially if he is able to match all of his accessories, which shows that a man cares for his appearance as much as he should.

Again, generational differences in opinion need to be considered. Many older women may not find them attractive for the sole reason that they were traditionally considered a “women’s accessory”.

Although typical gender profiles are rapidly becoming less concrete in the modern-day, older generations may be harder to convince.

Male earrings are generally considered unprofessional in stricter workplaces, such as office-based or corporate workplaces.

Many of these workplaces are still dominated by older individuals in powerful and influential positions.

These people tend to hold traditional views on earrings. As such, male earrings are not seen as professional in these workplaces, and wearing them is often not allowed or generally discouraged.

In these professional spaces, men who wear earrings often have to deal with several negative stereotypes.

Instead of wearing earrings, these workplaces encourage men to wear more traditional male accessories like tie bars or cufflinks.

This is often purely for the sake of not drawing too much attention, especially from the more traditional, older colleagues in positions of power.

Men who wear earrings might not even be considered if they are attempting to get hired, so men should avoid wearing earrings to job interviews as a general rule.

It’s just not worth the risk.

Also, there are many manual or physical jobs where wearing earrings would just be considered dangerous due to the risk of getting caught or being pulled out.

However, some workplaces that already counter other social traditions — for instance, tattoo parlors—are accepting of male workers who wear earrings.

In addition, more culturally laid-back workplaces such as tech firms or retail jobs may be more accepting as well.

It is steadily becoming more and more acceptable for men to wear earrings.

Many young men and women find male earrings attractive, particularly if they’re subtle, well-coordinated, and serve a purpose as part of an overall aesthetic.

However, male earrings are still considered unprofessional in many workplaces. It’s best to play it safe when it comes to your place of employment while saving the accessory experimentation for your social life.