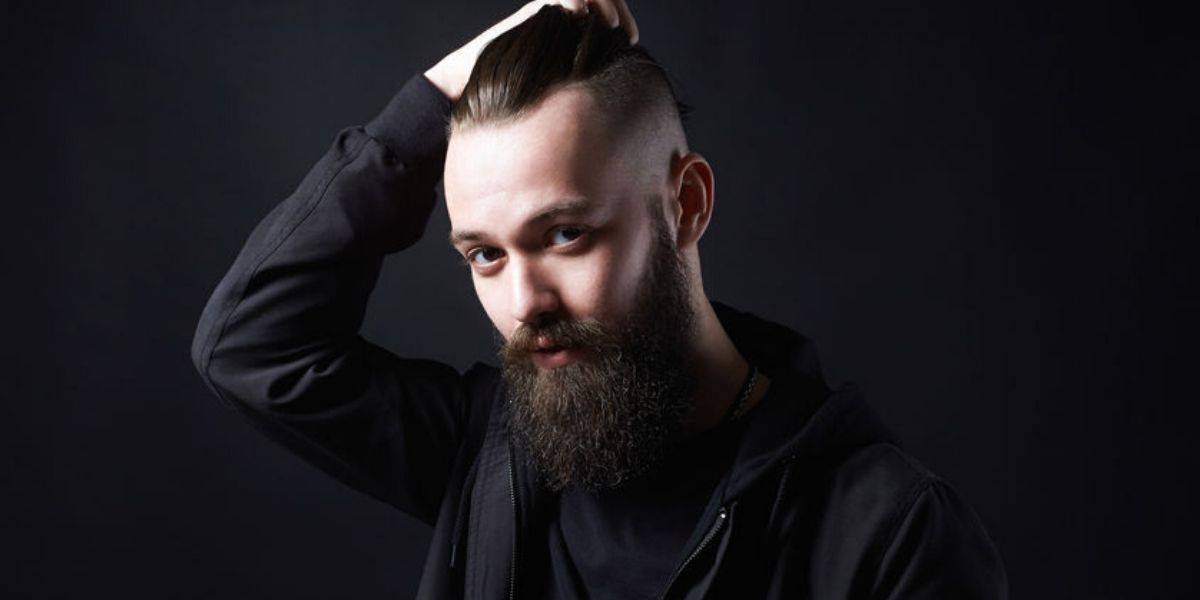 The Bald Undercut, also known as the “Bald Fade Undercut”, has soared in popularity in recent years. The reason why isn’t entirely clear, but I’d be quite confident in saying the great TV show Peaky Blinders has played a role.

Although the definition of what defines an “Undercut” is a bit blurred, there are some key features that’ll help you recognize one when you see it.

The Bald Fade Undercut generally works so well because it’s characterized by sharp lines and angles that catch the eye and easily draw attention.

It’s pretty high maintenance, however. Because of this, the style may not be for everyone.

But if you’re willing to put a little bit of extra effort in, this sophisticated, trendy, and thoroughly sleek style may be exactly what you’re looking for.

What you’re going to learn in this article is exactly what defines the style. Then, you’ll be seeing some great examples of subtle variations you could look upon for inspiration.

What Exactly Is A Men’s Bald Undercut?

Put simply, an Undercut is defined by the hair on top being disconnected from the back and sides. The back and sides are usually buzzed down or at the very least closely cut.

In contrast, the hair on top is significantly longer.

This disconnect between the top and the sides and back leads to sharp lines and angles. The separation can be exaggerated by a hard or shaved side part. The hair on top essentially has all the volume and can be styled in many different ways.

It can be slicked backward, or puffed up into a Quiff, Pompadour, or even a Faux Hawk.

It can also be allowed to flop forward into a Fringe or slicked to the side in a Comb over.

A Bald Fade Undercut is an Undercut style where the sides and back are faded. The shortest length is bald with the hair gradually increasing in length upward.

To achieve the “bald” portion of the bald fade undercut, the sides are usually shaved or at the very least buzzed down using a clipper with no guard.

The fade could be low (within a couple of centimeters above the top of the ear), high (around the level of the temples), or mid (in between the two).

The contrast in length between the bald fade and the long hair on top is usually very striking.

An Undercut is very similar to a Crew Cut, which is a buzz cut also defined by long hair on top with short, buzzed down sides and back. Although there’s a lot of overlap, in general, an Undercut has slightly sharper lines and more disconnect.

Opinions hugely vary when it comes to this topic. I often use similar pictures as examples of both styles.

But when you hear the term “Undercut”, just think “disconnected”.

OK, so you’re pretty clued up on what the style actually is now. It’s time to go through some subtle variations mainly focused on the level of the fade.

As I mentioned earlier, the low bald fade undercut has the level of the fade lying within a couple of centimeters above the top of the ear.

It’s a great choice for men looking for a more subtle appearance to their Undercut. With more hair on the sides and back, the disconnect is less in-your-face.

But a bald fade is still a great way to add a touch of uniqueness to the style. In the picture above is a low bald fade undercut with the hair on top worked into a wavy quiff.

As you can see, it looks very sophisticated with a low fade.

For a man looking for a professional and subtle yet modern and trendy style, this could be an ideal choice.

As you can see, however, the bald fade adds a layer of complexity to the Undercut. Regular visits to the barber will be necessary to sharpen it up.

Plus, the hair on top will need styling with product to keep it looking tidy. This will be the case no matter what level the fade is.

This one is characterized by the hair on top being a pretty equal, or uniform length and texture.

The way in which the top is styled can vary greatly. It can be slicked or styled in many different ways. However, it needs to appear pretty uniform along the length of the top of your head.

Of course, the sides and back are faded down to a bald length. The level at which the fade lies can vary as I explained above.

Having the hair appear uniform on top can make the Bald Fade Undercut look very structured indeed. The lines look cleaner and the angles look sharper.

A high bald fade lies around the level of the temples. As a result, the style is very eye-catching and hard to miss.

Because of the attention it’ll no doubt draw, it requires a certain level of confidence to carry it off.

It can often look very dapper but does require a pretty technically skilled barber.

With significantly less hair on the sides and back, the hair on top is given a lot of prominence due to the contrast.

One benefit of a high bald fade is that it can often make receding hairlines look less obvious. The high fade almost absorbs the receding temples, camouflaging them and making them less noticeable.

As you probably expected, here’s the middle-ground for you. A mid bald fade lies in between the level of a high fade and a low fade.

It can be considered a fantastic compromise between the two. It has the subtlety of a low fade while still benefiting men with receding hairlines in a similar way that a high fade would.

There isn’t much more to say about this style. It carries the same sophistication and elegance a low fade would.

A “taper” is a more subtle form of a fade. It can almost be considered a very low fade.

The subtlety this deft touch can bring is very appealing to men. The sides and back are short all the way to the top, but the bald fade is at a very low level.

The top is still styled or slicked in the same way any other Undercut would be.

This small variation is yet another way to add a touch of uniqueness to a style. These little incremental changes are what add up to a fantastic hairstyle.

Can An Undercut Cover Up A Bald Spot?

Yes, an Undercut is a great way to cover up a bald spot if the hair on top is still thick enough to do so.

The most effective way to do this would be to slick the hair on top backward. This is a popular way of styling the Undercut that would work well for this purpose.

The slicked-back hair would be able to cover up a thinning crown, while retaining the impressive disconnect with the back and sides like any other Undercut would.

What About The Bald Undercut On Girls?

It’s a good way to stand out from the crowd and express some individuality.

A popular way in which this style is worn is with the hair on top being long (shoulder length or beyond) with the sides and back faded to bald as with the other types of Undercut.

The hair on top is then swept to the side and allowed to drop down. This distinct, alternative style is edgy and attention-grabbing. It often looks fantastic.

A variation is the “bald nape undercut” where the level of the fade is just above the nape of the neck.

Do Bald Undercuts Always Have To Be Disconnected?

Yes. The disconnectedness is integral to the definition of an Undercut, and is one of the key ways in which it is different to other styles such as buzz cuts (including Crew Cuts).

This disconnect is often exaggerated by barbers using sharp and obvious lines separating the sides, back, and top.

The contrast this produces is what sets it apart. Although there is some debate around this topic, if you bear this principle in mind you won’t go wrong.

A good barber will know what you mean when you say Undercut. However, describing the disconnectedness you’re looking for is a good way to avoid any misunderstanding between the two of you.

It’s another great example of a modern style with a large number of possible variations. There’s so much space for experimentation.

Although the maintenance requirements are quite high, the effort produced often brings about an incredibly rewarding outcome.

This is what will keep you coming back to the style.

The Bald Undercut may not be for everyone. But if you like what you see, it’s definitely worth showing it to your barber and trying it out for yourself.

There’s so much versatility with what you can do with the hair on top that you’re bound to find a variation of the style that’ll work for you.