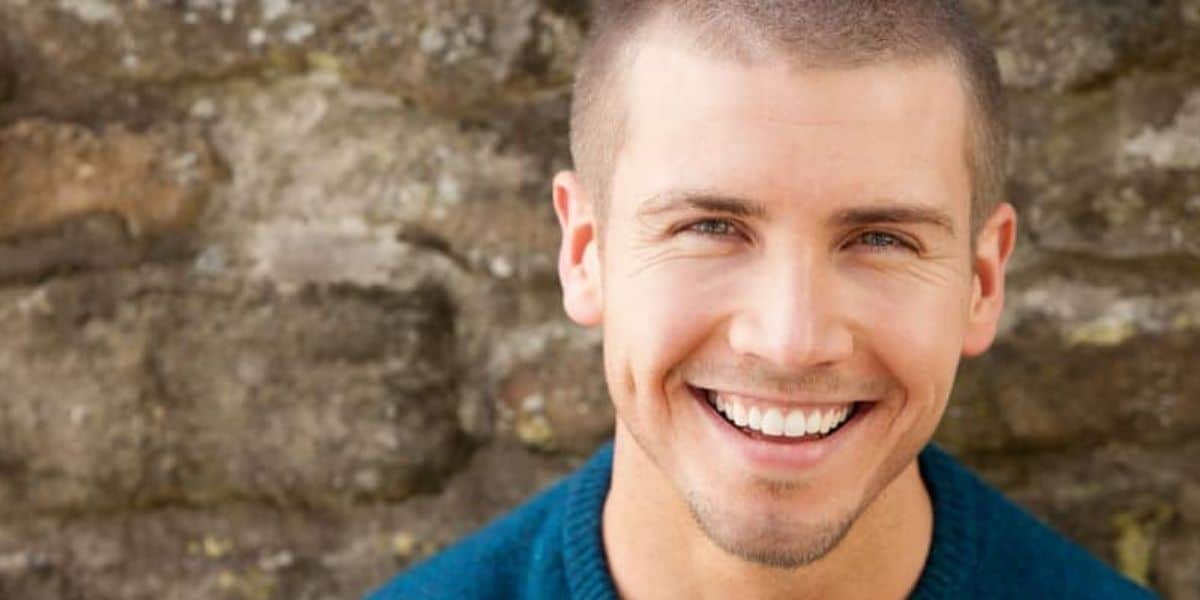 Trimming a buzz cut will eventually become a zen-like experience. But initially, getting it just the way you want can be stressful. One part is particularly notorious for this. What do you do about the sideburns when trimming a buzz cut?

In general, buzz cuts should have sideburns. The length and shape of the sideburns you choose will mainly depend on face shape and personal preference. Sideburns are valuable tools, as they can be used to frame the face and offset features if necessary.

Buzz cuts have a tendency to exaggerate facial features, such as making a round face look rounder, or a long face look longer.

Use sideburns to your advantage and use them to offset this.

You’ll want to trim the sideburns down the same way you would for the rest of your buzz cut. After this, you can decide how long or short you want to keep them.

You’re about to learn everything you need to know to achieve all of this and more.

The first step to deciding how long you should leave your sideburns when trimming a buzz cut is determining your face shape.

Use the following as a basic guide to achieving this.

Once you’ve got these measurements, you’ll be able to use them to fit yourself into a face shape category.

I like to split them into “long” shapes and “short” shapes. Generally, I feel it’s more useful to know which of these two broad categories you fall into.

It’s also best to avoid fretting over deciding whether you fit into more niche shapes such as “diamond” or “heart”.

Taking your face shape into consideration, you’ll be able to figure out what length of sideburn works best for your buzz cut.

But knowing your face shape can help you hone in exactly how long you want to go with them.

Here is a list of them, together with the sideburn length that will most likely work best.

The forehead-to-chin measurement is greater than the cheekbone distance. In addition, the forehead length is generally longer than the jawline length.

With oval faces, you’ve got the benefit of versatility. Men blessed with this face shape have choices when it comes to sideburns.

In general, mid-ear sideburns are an excellent option. They nicely frame the cheekbones and accentuate the jawline.

But as I mentioned, feel free to experiment.

The forehead-to-chin measurement is longest, while the other three measurements are pretty similar in length.

The danger here is making the face look too long. Buzz cuts tend to make long face shapes such as this look even longer.

Keep the sideburns shorter and a little wider to offset the length of the face.

In general, short sideburns are better here. They’ll offset the wide jawline while also framing the face a little.

You may be spotting a pattern here – shorter sideburns provide a nice contrast and balance with longer face shapes.

In much the same way, let’s talk about shorter and rounder face shapes.

A buzz cut will make a round face look rounder. You won’t have the benefit of long hair on the scalp to offset the roundness by quiffing it up, for instance.

So, how can sideburns help?

Once again, use them to contrast and provide balance.

Longer, straighter, and potentially even narrower sideburns will offset the roundness of the face once the hair is buzzed down.

It frames and lengthens the face, while also giving the jawline more definition. The face will look a little squarer and more structured.

But don’t go beyond the bottom of the ear – this gets into a pretty niche territory and is definitely more of an acquired taste.

The Mutton Chops aficionados among you may disagree, however.

Unlike with round faces, the four measurements are quite equal. It’s a pretty versatile shape to work with, so feel free to experiment with sideburn length.

Once again, however, longer sideburns will make the squareness seem better proportioned and balanced.

Why Clean-Cut Sideburns Are Better For Buzz Cuts

By “clean-cut” I mean sharply defined edges and bottom.

The reason this is generally better than leaving things too au naturale is that it’s in keeping with the clean aesthetic of a buzz cut.

Buzz cuts are well known for their military aesthetic. Neatness and efficiency immediately come to mind when thinking of them or seeing them.

Keeping the sideburns neat, well-defined, sharp, and intentional-looking is great because it’s consistent with this vibe.

If you’re using the sideburns to offset facial features by adjusting length and framing the face, keeping them well-defined will make it so much more effective.

Keep them crisp and clean; you’ll definitely notice the difference.

Can You Ever Have A Buzz Cut Without Sideburns?

You can have buzz cuts with no sideburns, but it usually only works when you’ve got a skin fade.

A buzz cut with a skin fade is one where the sides gradually increase in length as you go upward.

The shortest length is essentially bald, which is why it’s called a “skin fade”. The sides are then tapered as you go upward, slowly increasing in length.

It produces a very nice, graded effect. However, you’ll almost definitely need a professional to help you get it done without messing it up.

This is probably the only instance where a buzz cut with no sideburns wouldn’t look awkward.

The look is very intentional and the effect is impressive, although it may not be to everyone’s taste.

But contrast this with a regular buzz cut where the sideburns are simply shaved off at the level of the temples.

This could be considered a buzz cut style “without sideburns”. There are few people that would deem this attractive or even acceptable.

You’ll also lose the benefits sideburns can bring to a buzz cut. You won’t be able to use them to your advantage by offsetting features, adding balance, and framing the face.

To sum that up, unless you’re going for a skin fade (with professional assistance), always keep some sideburn when trimming a buzz cut.

You could choose to keep them very short if you wish to, and this may well be what you need if you’ve got a particularly long face shape.

But as a basic rule-of-thumb, don’t trim your sideburns higher than the top of your ear.

The Buzz Cut And Beard Look

Another option would be to blend the buzz cut sideburns into a beard. This can look very stylish indeed.

Beards work so well with buzz cuts because they can also be used to offset length and add balance.

For example, a long goatee style could be used to make a shorter or rounder face look a little longer. It’ll add balance.

Of course, it will require some additional maintenance. Most significantly, beard maintenance – something you may or may not be willing to endure.

In addition, making sure the sideburns blend seamlessly into the beard is also important.

You don’t want a hard line where the sideburn meets the beard as this can look awkward.

Knowing how to fade the beard into the sideburn is an additional skill that can work very well if you’re willing to learn it.

At first, you’ll almost certainly need the assistance of a barber to help you do this.

But once you’ve got the hang of it and you’ve got yourself a decent pair of clippers, there’s no harm in trying it out yourself.

Overall, if you’re willing to put up with the additional maintenance requirement and the learning curve, a beard may be a perfect supplement to that buzz cut.

That should give you a good guide to work off of. But experiment regularly to figure out what works best for you.

These aren’t hard-and-fast rules, but they should give a pretty good idea.

Buzz cuts can transform a face. The first time you do it, you may be surprised by the end result.

If you’re looking for a way to add definition, structure, volume, and framing, use sideburns to your advantage.