8 Wildly Interesting Things A Ponytail Says About A Man

If you’re looking for a hairstyle that’ll turn heads, the ponytail may be for you. Whether it’s a positive reaction or a negative one, it’ll always make its presence known. But what exactly does a ponytail say about a man?

A ponytail can say that a man is laid back, able to commit to a high maintenance style, and is comfortable with being a nonconformist. It also says that he’s most likely more style-conscious than others may think at first.

Although that’s the gist, I wanted to dig deeper – a whole lot deeper.

Men and ponytails date back hundreds of years. From the Chinese Qing Dynasty of the 17th century to the rock stars of the 20th century, it’s a hairstyle that shows no signs of fading away.

It may wax and wane in popularity, but there’s always that one guy in a crowded room that chooses to fly that ponytailed flag.

Without further ado, let’s get to it.

8 Things A Ponytail Says About A Man

You may be deciding whether or not to commit to a ponytail. You may already have one and you’re just curious what it may say about you.

It takes guts to stand out from the crowd, buck the trend, and swim upstream.

Not every man is cut out for it. To stick out means to draw attention. In order to be comfortable with attention, you need to be bold and confident.

Eyes are drawn toward things that are different.

Whether it’s a Hawaiian shirt, wearing sunglasses indoors, or a ponytail, if you’re the only guy in the room that’s got it, people are going to take notice.

To walk into that room knowing this full well, you need to have a certain amount of confidence to pull it off.

Being awkward with the attention you know you’re going to get is easily noticeable. It’s tough being a man with a ponytail that’s not comfortable with his bold style choice.

They usually don’t hang on to that ponytail for long.

But those that choose to rock a ponytail day in and day out have the long-lasting confidence to see it through.

If they didn’t have it before growing the ponytail, there’s a good chance they developed it steadily as their ponytail journey progressed.

There’s just something about long locks hanging freely down the back of a neck that just oozes chill.

A man with a ponytail just knows how to relax. Yeah he’s probably got stuff to do and he’ll get to it – but what’s the rush?

Life’s too short for haircuts and stress.

The ponytailed man just seems to understand that better than most and it’s really unclear why.

Sure, it won’t be true for everyone. There are, of course, going to be exceptions to the rule.

But don’t tell me you’ve never met a ponytailed guy you just wanted to sit back with, hang, and discuss obscure brands of green tea with.

Experimenting with quiffs and fades isn’t too much of an ordeal. The right haircut and the right product will serve you well.

Don’t like it? Change up the style. No big deal.

But a man that chooses to style a ponytail has potentially put in months or even years of work to make it happen.

Ponytails don’t just happen – you need enough length. Once you’ve got enough length, you need to take the time and energy to maintain that length.

Conditioning, brushing and even straightening.

It takes dedication and persistence to not only get to a stage where you can tie a ponytail, but also maintain it in a way that’s considered aesthetically pleasing.

Unwashed and unbrushed hair in a ponytail is noticeable from a mile away. Someone with silky, luscious locks in a tie has worked at it.

When a man commits to a style choice in such an empathic way, you could reasonably assume that he commits to other things in life as well.

Whether that’s his home life or his work life, few things are more impressive than a man who commits.

4. He’s Comfortable With His Masculinity

Gender-based style stereotypes are quickly becoming a thing of the past.

It’s true that the ponytail was considered the “normal” style of choice in certain eras during the last few centuries.

But it’s no secret that it’s mainly worn by women in modern Western culture. That’s mainly because most men have short hair these days.

Although these stereotyped profiles of “male” and “female” dress codes won’t be around for much longer, it’s reasonable to suggest that a man that chooses a ponytail is comfortable with his masculinity.

He’s got nothing to prove and has no chip on his shoulder.

His style choices are his own and he pays no attention to societal norms. He chooses to go down the androgenous route and knows he looks good doing it.

They’re all about simple, clean-cut styles that don’t draw attention and don’t distract from the bottom line of the business.

Part of it is about getting people to fall in line. About discipline.

Compare that with the ultra-liberal and relaxed dress codes of modern tech startups, for instance. In these workplaces, a man in a ponytail wouldn’t even be noticed, let alone yelled at by management.

But if a man is looking to land that job in an investment bank or city law firm, he’ll probably be snipping that ponytail off before the interview.

One reason for this is that the employers at these traditional corporate workplaces tend to be from an older generation.

A generation where ponytails on men simply weren’t as common. They don’t fully understand the uber-relaxed workplaces of the modern-day. In their minds, relaxed dress codes equate to reduced productivity and insubordination.

Whether you agree with it or not, it’s just the way of the world.

So, a ponytail often says that a man (probably) isn’t corporate.

It just wouldn’t add up.

Sure, a ponytail is a lot tidier than allowing it all to hang down freely. But it usually won’t be enough.

Got a rebellious edge? Consider the ponytail.

It goes back to standing out from a crowd. For decades, the ponytail has symbolized nonconformity and a reluctance to play by the rules.

This has been depicted in books, TV shows, and movies. Think of the antics of those ‘70s rock stars in ponytails.

There’s just something about a ponytail that yells “rebel” and that’s a huge part of its appeal. A lot of men choose to wear a ponytail solely for this reason alone.

It’s a great way to make a statement.

Men in ponytails are commonly found in the arts industries and music is one where the link is well and truly established.

A conversation with a ponytailed man isn’t complete without an in-depth debate about the rise and fall of ‘80s progressive rock music.

They just seem to know their stuff.

This one’s a fun one too and sure – I’m not being 100% serious. But men that are really into their music also seem to really be into growing their hair long.

Some of these long-haired music lovers will eventually tie that long hair into a ponytail.

Although the rock and metal genres do – by far- have the strongest association with long hair and ponytails, it isn’t by any means an exclusive link.

There are plenty of musicians in a wide range of genres that choose the long-haired life and will no doubt tie that tail from time to time.

As far as stereotypes go, it’s a pretty cool one.

As chill as a man in a ponytail may come across, there’s a pretty good chance he actually cares deeply about how he looks.

That’s by no means a bad thing. After all, this blog is all about men who go the extra mile to look and dress better.

But it’s interesting because although men in ponytails do give off that nonconformist, rebellious, “don’t care” vibe, they may care just a little more than you think.

A ponytail is a style just like any other. The difference is the time and commitment it takes to get this style.

It isn’t like most other styles. It takes persistence and perseverance to achieve.

Because of this, it’s safe to say that a man that puts this much time and attention into achieving a style probably cares about style in general.

Although a ponytail can make a man look pretty effortlessly laid-back, a surprising amount of effort has gone into the style.

That’s the irony of it.

It may not be true for all of them, but there’s a good chance that a man with a ponytail probably has a good sense of fashion in general.

He probably cares about a good fit to his clothes. He may even be brand aware.

Ultimately, a ponytail can say that a man is style-conscious – a point where every man should eventually get to.

There you have it. 8 things that a ponytail could reasonably suggest about a man. You probably figured out that some of them were more serious than others.

Hopefully, you’ll agree with at least some of them.

If you’re a man that’s wondering whether to commit to a ponytail as his style of choice, this article may well have tipped you over the edge either way. 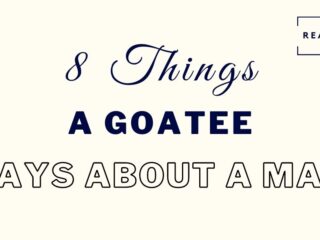