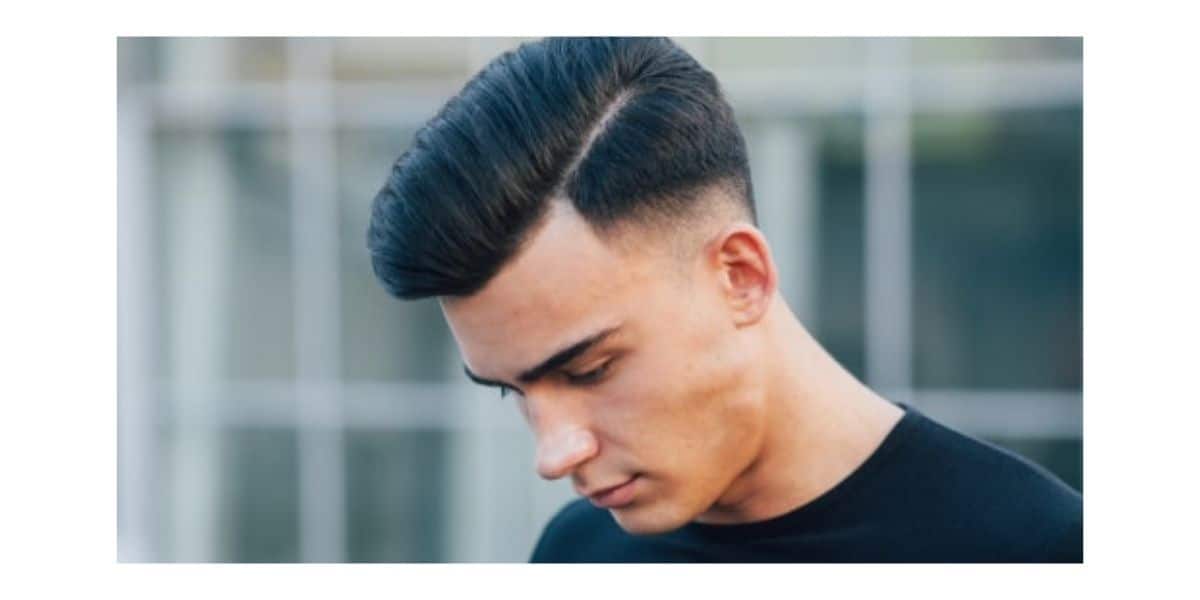 Having medium to long hair does give you the glorious option of being able to sweep it back. But combining it with a taper will always give it a modern edge. Here’s everything you need to know about swept-back fade hairstyles.

These days you could pretty much add a fade to any classic hairstyle and it would probably work.

I’m exaggerating, of course, but you get my point.

If you’re looking for a way to make your current hairstyle more interesting, strongly consider asking your barber whether fading down the sides and back would work.

But getting back to the point, let’s define exactly what you’re here to learn about, before going on to talk through 11 great examples of the style itself.

What Is A Swept Back Fade

A swept-back fade is any hairstyle where the forelock (hair over the forehead) is swept upward and backward. The sides and back (or just the sides) are then tapered or faded so that they gradually increase in length from bottom to top.

The hair on top can be left flat (slicked back) or given some volume like a pompadour.

Either way, when you’ve got the right length of hair, you’ve got options.

The fade can be very low (a simple taper), low, mid, or high.

A low fade is one where the starting point of the fade (the transition point) is around an inch above the top of the ear.

A high fade has a transition point at the top of the sides near the temple.

A mid-fade transitions in between these two points.

The level of fade you choose is mostly down to personal preference. Tapers and low fades are more subtle, as you’d expect.

But enough theory – let’s get to the fun part.

Alright – it’s time. Here are some phenomenal examples of this combination done right. Use it as a source of inspiration.

1. Classic Swept Back With Mid Fade

You could either call this a classic pompadour or a straightforward and slicked-back style. It’s got some volume so I’m tempted to call it a small pompadour.

To get that wet finish you’ll most likely need to use a pomade or light gel. Nothing too overbearing or obvious.

As you can see, the fade is a “mid-fade” because the transition point is around mid-way between the top of the ear and the temple.

2. Swept Back Mid Fade And Beard

You could call this either swept-back or side-swept.

Taking a look from a side-profile such as this is always helpful. It puts things into perspective and allows you to see just how much height a style such as this can add.

It adds vertical height – perfect for men with rounder or shorter faces.

It’s another example of a mid-fade and it’s been continued all the way around the back.

It’s not quite a “skin fade” because the shortest length is very light stubble as opposed to shaved.

Having said that, the difference between the shortest and longest lengths at the sides and back is so obvious that the contrast is still very eye-catching.

In addition, the contrast between the sides and the beard also draws attention.

The beard has been expertly lined up and subtly blended into the sides. In other words, the transition between the top of the sideburn and the side isn’t too harsh or obvious.

3. Vintage Swept Back Pompadour With Fade

This swept back and faded style is one of the more obvious pompadours on this list.

Yes, it’s been swept. But it’s the volume that gives it away.

The smooth, rounded shape of the pomp is what gives it that vintage and classic vibe.

It’s so interesting how the fade – a thoroughly modern and popular style, works so well with such a retro and classic look.

A fantastic blend of the old with the new.

The swept-back, voluminous appearance can be created using a round brush and a good blow dryer.

This one is similar but it has a couple of unique features.

For one, the sweep is less shapely and more angular.

It’s a more “modern” pomp – this is particularly obvious in a side-profile such as this.

Plus, it’s impossible not to mention that line design. This isn’t something you’ll want to experiment with yourself. But if you’re into it, a trusted barber should be able to achieve it for you.

Yes – that’s a skin fade. As you can see, the shortest length on the sides and back is at the skin-level.

It’s eye-catching and provides such a great contrast to the pompadour above.

In fact, having the hair so short at the sides and back just makes the pompadour look even larger and more voluminous.

5. Swept Back Curly Pomp And Undercut

Although curls can be pretty difficult to manage at times, when you know how to manage it the options are infinite.

As you can see, the hair has been shaped and swept back into a small, curly, modern pompadour.

You could call the sides faded, but technically this is more appropriately labeled an “undercut”.

An undercut is a style where the hair on top is left long, while the sides and back are trimmed very short in comparison.

There isn’t a gradual tapering of length, so technically it shouldn’t be called a fade.

I’ve included this in here, however, just to give you an idea of what alternatives are available to you.

If you’re looking for more of a stark contrast between the sides and the swept-back top, consider an undercut instead of a fade.

Once again, in this picture, the medium stubble has been intricately lined up with the sideburns – a fantastic way to add contouring to the face.

6. Swept Back Waves With Fade

What a great texture.

This loosely swept back appearance is usually best achieved using either a wide-toothed comb or your fingers.

Never underestimate the power of working the hair with your fingers while blow-drying. You can produce some very interesting textures.

It looks laid-back and natural. The front has been gently tousled.

The mid-fade is subtle. Once again the short sides make the hair on top look more prominent and really draw attention to it.

Finally, let’s talk about the stubble.

Stubble works great with swept-back hair because it frames the lower half of the face. It adds shadowing, it adds contouring, it adds balance.

A quiff is a style where the forelock is swept back, but not as far back as a pompadour.

Technically you could call this side-swept instead of “swept-back”, but it’s an important variation to be aware of.

It’s easier to achieve and manage than a fully swept-back pompadour. A comb and a blow dryer would do the trick.

Quiffs are great for men with rounder or shorter faces because they add a little bit (or a lot) of vertical height to the face.

Here’s a glorious example of medium-length hair that’s been swept back but left “messy”.

The textured, separated appearance is, once again, best achieved using the fingers. Working some matte clay into it should produce that fantastic tousled appearance.

Interestingly, it’s actually a great option for men with thinner hair. The separated clumps of hair on top actually give the illusion of thicker hair.

The skin fade is very neat. You’ll notice that the transition is pretty sudden and sharp but it works well.

The grading of your fade is something you can experiment with after a careful discussion with your barber.

Here’s a great example of an undercut with a low fade.

This may sound confusing, but let me explain.

As you can see, there’s a very stark and obvious difference between the hair on top and the sides.

The sudden transition between the sides and the top is what gives it that characteristic undercut appearance.

But you’ll also notice that there’s a subtle low fade as well. In other words, the sides still gently increase in length as you go from the bottom to the top.

It’s a “low fade” because, as I mentioned earlier, the transition point for this fade is around one inch above the top of the ear.

The forelock has been swept back into a swirled quiff, while the hair behind it has been left flat.

You can actually use a blow dryer to provide some downward pressure on the hair behind the quiff.

This will neaten it up, but also make the quiff look even more prominent and obvious.

A “hard part” is where the side parting is exaggerated and made to look very obvious.

It’s best achieved using a blow dryer and a comb or brush.

A light pomade will help as well. Plus, it’ll give you a nice, polished finish.

The medium-long beard works well because it adds balance but isn’t too overwhelming.

What’s great here is that the hair is swept back and to the left, but doesn’t add too much height.

Having a full beard does run the risk of elongating the face too much, particularly for men with longer faces.

So, keeping the swept-back hair relatively short and not giving it too much volume is a better option here.

A top knot is essentially a man bun, only slightly shorter/smaller and sitting further forward along the top of the head.

It’s another great example of what can be achieved by sweeping back medium-length hair.

Hair doesn’t need to be super-long to produce a top knot or man bun. You just need enough.

You could call this a high fade because the transition point is so high up the sides. It’s around the level of the temples.

This is another example of just how versatile fades have become. You could practically add a fade to any hairstyle you want to.

As you’ve now seen, the options list is pretty lengthy. When you’ve got hair long enough to work with, you’re pretty spoiled for choice.

Hope you enjoyed that.

Use this list as a source of inspiration in your faded journeys. Have fun with it. 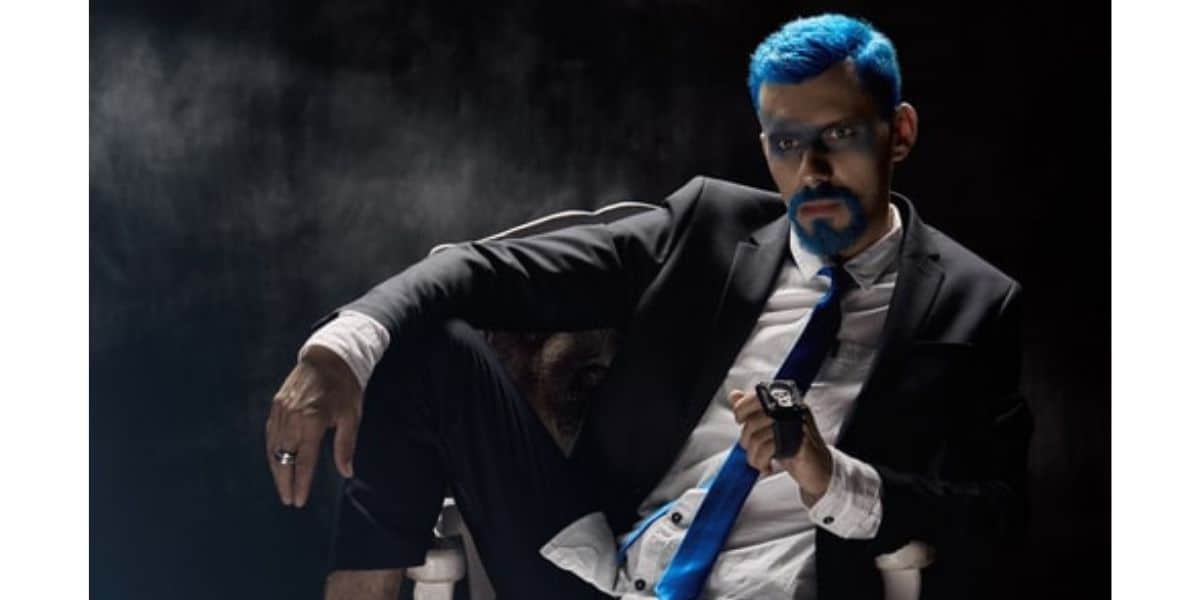 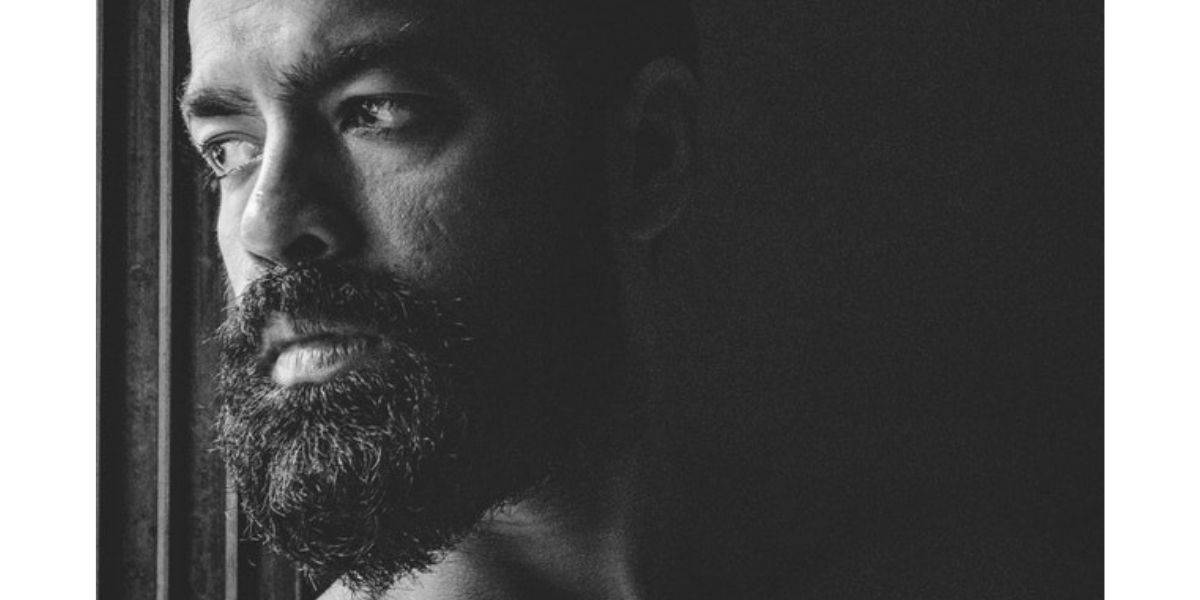 6 Easy Ways To Fix A Stringy Beard
Read Next Post →
Comments are closed.