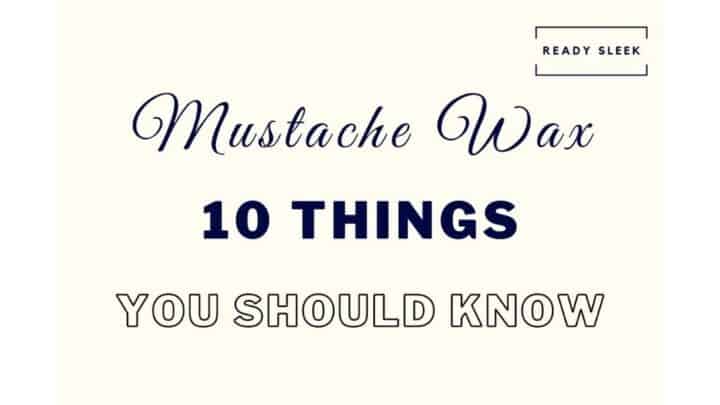 There are few grooming products as intensely masculine as mustache wax. Even if you only whip it out for those special occasions, it’s just fun to know you own some.

For some mustachioed men, there’s really no substitute. It provides exactly the right amount of hold they need.

Applying it isn’t tough – there are plenty of awesome tutorials out there showing you exactly how to do it in the most effective way possible.

But there are still so many questions on mustache wax out there that just haven’t been answered properly.

1. Are Beard Wax And Mustache Wax The Same?

Beard wax and mustache wax are essentially the same. They both usually contain beeswax as their core ingredient, as well as possibly petroleum jelly and various essential oils and carrier oils.

The ingredients are so similar that it isn’t worth worrying about. If all you’ve got is beard wax for your mustache, it’s absolutely fine. Use it. It’s all facial hair at the end of the day.

Which one you choose to style your mustache with isn’t important. Both beard wax and mustache wax could potentially do what you need it to do.

What’s more important is ensuring that the product you choose has the correct hold and strength for your specific purposes.

Both mustache wax and beard wax typically have a medium-to-heavy hold and will be better suited to men looking to style more heavy-duty styles such as Handlebars.

Men looking for a lighter hold would be better off going for mustache or beard balm.

But if you’re looking for a strong styling product without much need for conditioning, go for mustache wax or beard wax.

Applying a drop of beard oil beforehand is a good way to moisturize the mustache beforehand and to make it less dry and easier to style.

2. How Often Should You Apply Mustache Wax?

Mustache wax is usually applied once or twice a day. Although light touch-ups during the day may occasionally be necessary, it generally has a strong hold and a little bit goes a long way.

As with any grooming product, use the minimum amount necessary to get the job done. It’s cost-effective.

But it also gives your mustache a break now and again. It doesn’t need to be weighed down by mustache wax all the time. Plus, using mustache wax excessively can cause it to look greasy and thin.

It does usually contain beeswax, after all. It’s a shiny ingredient and shine can lead hair to look thinner than it otherwise would.

There are a few instances where you may need to add a little more wax during the course of the day. Particularly windy days can lead to stray mustache hairs sticking out. A light touch-up would be reasonable.

3. How Long Does Mustache Wax Last?

The effects of the average mustache wax will usually last between 4 and 8 hours. It will depend on the strength of the wax, as well as what you do during the day.

For example, sweating profusely or biking on a particularly windy day will, of course, lead to some of the effects of the wax weakening prematurely.

In addition, eating multiple meals without much caution for the mustache will lead to some of the style undoing itself as well.

It also depends on how complex the style you’re looking to keep in place will be. If you’ve got a particularly difficult one, mustache wax will find it harder to keep in place for prolonged periods of time.

But overall, 4 to 8 hours for the average mustache is a pretty safe bet. Ultimately, a decent mustache wax should be expected to last you the majority of the working day with the possible allowance of one top-up.

You can also expect a bit of residual mustache wax the next day if you don’t wash it properly. Beard wax and petroleum jelly do tend to accumulate – this is called build-up.

Some men love it because it means you get more for your money. You’ve got a bit of leftover mustache wax you can use for styling the next day.

4. What Should You Do If Your Mustache Wax Doesn’t Hold?

If mustache wax doesn’t hold your mustache in place, pre-conditioning and combing beforehand, as well as choosing a stronger wax will help.

There are many possible reasons for mustache wax not holding. One could potentially be your mustache itself.

Unclean and poorly groomed mustaches are more difficult to style and keep in place no matter how strong the wax may be.

Wash and dry the mustache prior to applying the wax. In addition, the basic snipping of stray hairs will also help keep the mustache tidy and easier to style.

Combing beforehand will do the same. It’ll detangle the deeper hairs within the mustache and make it lay neater and flatter before applying the mustache wax.

A drop of beard oil is a great way to condition the mustache before applying the wax. This will make it more responsive, easier to style, and more likely to hold with mustache wax.

5. How Do You Stop Mustache Wax Leaving A White Residue?

To stop mustache wax from leaving a white residue, soften and emulsify the mustache wax properly before applying it.

Mustache wax contains beeswax and can be pretty tough and hard as it lies in the tin. It can be difficult to break down.

Before scooping it out, it may be a good idea to heat it up a little using a blow-dryer. Just five seconds may be enough to do the trick.

Once you’ve softened it, scoop it out with your thumbnail and break it down (emulsify it) in between your thumb and index finger. You shouldn’t have any bits or clumps before you apply it to your mustache.

All you should be left with is a gentle sheen on your fingers. That’s it.

Once you’re sure you’ve broken it down properly, you can be pretty confident that you won’t be left with a white residue on your mustache after you apply it.

Yes, mustache wax does eventually go bad and expire. Although it will usually have been used up before it ever becomes a problem, a clear indicator would be the mustache wax cracking and becoming brittle.

It can be difficult to know when exactly the product “expires” once it’s been opened. Using it within a year would be a pretty safe bet, however.

As with any of your mustache grooming products, store it in a cool, dark place to prolong its life.

If you notice the wax becoming brittle and cracking, or even changing color or developing an unusual smell, it’s probably best to get yourself a new one.

7. Can You Use Chapstick As Mustache Wax?

Chapstick can be used as mustache wax as it’s also a waxy substance that will give you some hold. However, it won’t contain the same essential oils and carrier oils that mustache waxes usually do.

If you’re going to use chapstick as mustache wax, try to go for an all-natural one like Burt’s Bees.

One of the benefits is just how practical it is. You can easily store it in your pocket for touch-ups during the day – it’s easier than storing a little tub or jar.

It’ll give you a bit of hold – probably enough for light styling.

But you’ll be missing out on some of the additional benefits that proper mustache wax might give you that chapstick won’t.

You’ll miss out on the soothing and moisturizing properties, as well as the scent of the essential oils and carrier oils that are usually included in mustache wax.

If you do use it on your mustache, it’s probably best to not use the same one on your lips. You don’t want stray mustache hairs stuck to the chapstick ending up on your lip or in your mouth.

8. Can Beard Balm Be Used As Mustache Wax?

Beard balm should not be used as a substitute for mustache wax because they don’t do the same thing. Mustache wax has a stronger hold and will be more effective for heavy-duty styling.

Beard balm does have some hold, but not as much. It is better for light styling and also for softening, conditioning, and moisturizing the mustache hair.

While mustache wax usually has beeswax as its core ingredient, beard balm will often contain creamier ingredients. Eg. fruit and nut butters such as shea, aloe, or cocoa.

Using a bit of both is quite a common technique. For example, when styling a Handlebar, beard balm could be used for the majority of it.

However, to really get the twists in at the end and keep them that way, the strength of mustache wax would be better.

But if you aren’t looking for anything too complex and simply want something to keep stray mustache hairs at bay, beard balm will most likely be more than enough for your needs.

But at the end of the day, mustache wax and beard balm shouldn’t be seen as interchangeable because they’re very different products.

9. Can You Use Mustache Wax On Your Eyebrows?

A small amount of mustache wax can be used on the eyebrows to flatten stray hairs. Be careful not to get any in your eyes, however.

It’s important not to use so much that the beeswax leaves a shine – this can look obvious in the right amount of light.

Other waxy products like chapstick or Vaseline would also be reasonable alternatives you could use to flatten stray eyebrow hairs.

Mustache wax may not have been meant for this purpose, but wax is wax, after all. It’s an incredibly versatile ingredient when it comes to styling.

10. Are There Any Alternatives To Mustache Wax?

Chapstick and Vaseline are often commonly used as alternatives to mustache wax. They won’t have the same holding power as actual mustache wax but should be OK for light styling.

Other commonly used alternatives include hair products such as the spiking glue Got2B Glued or simple hair wax.

However, it’s usually not a good idea to apply products meant for your scalp on your facial hair. The ingredients generally aren’t as kind to the skin.

Another often mentioned alternative to mustache wax you should definitely avoid is a regular glue stick. The chemicals in glue sticks weren’t meant for use anywhere near your face, so definitely avoid this despite how good the hold may be.

If you’re simply looking for a lighter hold or a better conditioning effect than mustache wax, beard balm or beard butter would be reasonable to use instead.

As I mentioned at the beginning, this wasn’t meant to be a step-by-step tutorial on how to use mustache wax.

Instead, my objective was to plug the holes that exist in the online information we’ve got on mustache waxes already.

Hopefully, at least some of these answers will help you use mustache wax in the best and most effective ways possible. 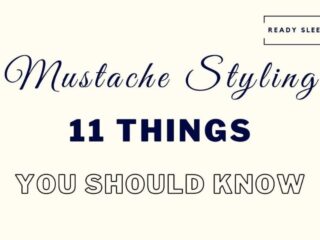 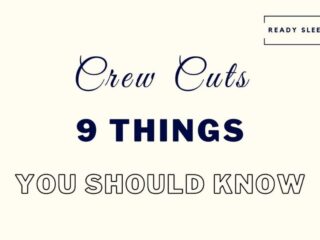