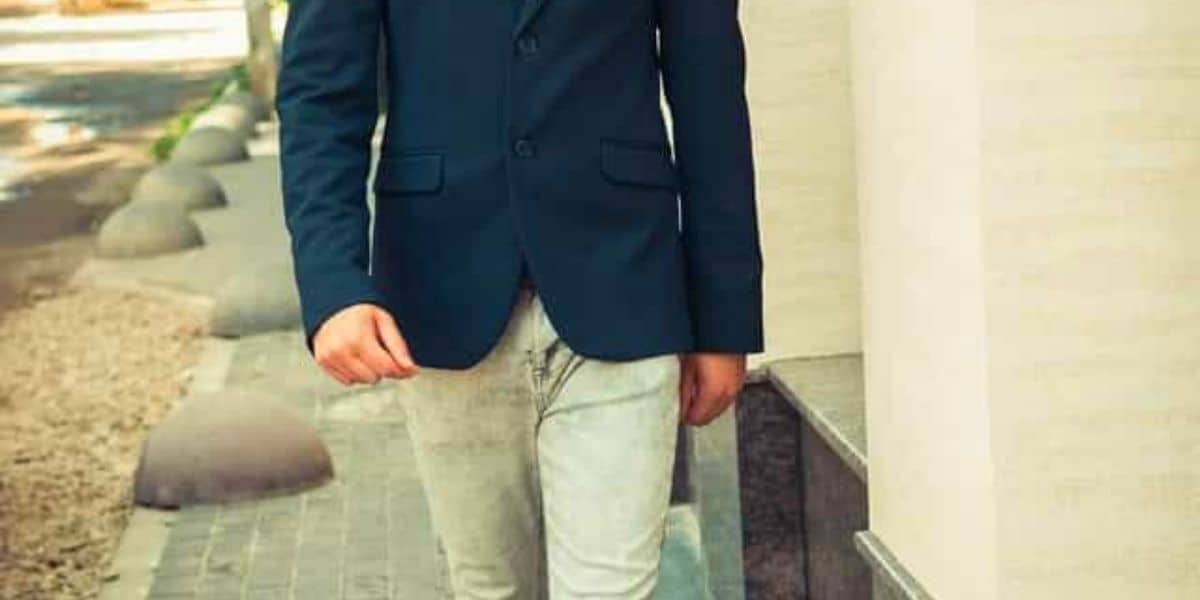 Men’s fashion can be a bit of a minefield. You think everything is going swimmingly until you unknowingly commit a faux pas that people refuse to forget. This begs the question, can you wear a suit jacket with chinos?

Suit jackets are not suitable for wearing with chinos in the vast majority of cases. The texture and thickness of the fabric, as well as the fit and length of most suit jackets make pairing them with chinos look awkward. Mixing formal with informal wear in this manner is usually not a risk worth taking.

Blazers and sports coats are far more suitable to wear with chinos, simply because their versatility allows for use in casual, semi-casual, and business casual settings.

Suit jackets should almost always be worn with their matching suit trousers, and occasionally with suit trousers from a different set in typical spezzato fashion.

That’s the answer in a nutshell, but as you’d expect, there’s more detail and nuance to it. Of course, there are also rare exceptions to the rule.

Let’s get deeper into it.

Here are the main reasons you need to get to grips with. Having a full understanding of the rules should prevent future faux pas, and maybe also allow you to break the rules in those rare instances where it’s acceptable.

The main principle to bear in mind here is that the formal nature of suit jackets will usually conflict with the relatively casual nature of chinos.

Suit jackets are often made from wool, with worsted wool being the finest and most formal you’ll usually find.

The fine fabric is what gives it that elegant sheen people look for. The more sheen the material has, the more formal it will usually come across.

The same goes for dress shirts and dress pants; usually made from wool, the sheen and softer texture instantly comes across as more formal.

Trying to combine a wool suit jacket with the cotton twill of chino pants will usually look awkward. Chino cloth has a rougher texture and much less sheen – that’s part of what makes it look more casual.

The fine wool and the textured cotton will conflict and the fact that a suit jacket is being used inappropriately will be very obvious.

You’ll also find suits in other materials such as linen, cotton, tweed, and flannel. These definitely look more casual. Although it’s possible to mix the suit jackets from these suits with chinos, it’s generally not recommended.

If you were going to do it, cotton suit jackets would be more appropriate as they would at least be more compatible with the cotton of the chinos.

Yes, it’ll be better than mixing a wool suit jacket with chinos. But there are usually other features of suit jackets that make them incompatible with chinos regardless of the fabric.

These features include the fit and length.

2. The Fit And Length Of Suit Jackets Conflict With Chinos

Unfortunately, wearing a suit jacket with anything other than suit trousers is obvious even to people with no sense of fashion whatsoever.

But why is that?

It’s because suits are usually structured to look as formal as possible, particularly worsted wool suits.

There’s a mismatch between the formal structure of suit jackets and that of the relatively casual chinos.

Here are some structural features of suit jackets that make them appear more formal than blazers and sports coats. In other words, features that make them usually appear too formal for chinos.

These features make suit jackets often stick out when worn with anything other than the matching suit trousers they were made to be worn with.

Sure, you can sometimes pair them with suit trousers from other suits and this would usually be more suitable than wearing them with chinos.

It’s what’s known as the spezzato style of splitting up a suit and it can look great when done properly.

But it doesn’t apply to chinos.

Ultimately, suit jackets instantly appear formal and chinos do not.

The last point was discussing structure (fit and length), whereas this one is discussing design.

They usually have welted or jetted pockets instead of patch pockets, and are designed in solid and often neutral colors as opposed to patterned.

It’s very rare to find suit jackets with traditionally casual features such as elbow patches. The buttons are also usually made of plastic and don’t contrast the jacket itself.

It’s this simplicity and neutrality that makes suit jackets look formal and sophisticated. That’s what makes them so perfect for formal wear.

Unfortunately, it’s this distinct lack of casual features that makes them even less suitable for combining with the relatively casual chino pants.

Even the more “formal” pairs of chinos with features such as center creases down each leg, welted pockets, and minimal seam details simply look too casual to wear with suit jackets.

Why You Should Wear Blazers And Sports Coats With Chinos Instead

By now you’ll have a solid understanding of why you should try and avoid the suit jacket and chinos combo.

But you’re probably wondering what you can wear as an alternative. Blazers and sports coats are the answer.

There are plenty of occasions and settings where a jacket and chinos would work perfectly well. It’s just important to use the right type of jacket in these instances.

Chinos are fantastic because they offer a massive amount of versatility. Sure, they’re not formal enough for suit jackets. But that isn’t the end of the world.

Both blazers and sports coats are casual enough to often fit seamlessly with chinos. Let’s talk about them individually.

They often come in fabrics such as worsted serge or flannel, which lack the typical sheen of the worsted wool suit jacket.

They aren’t as structured as suit jackets in the shoulder area, and often have contrasting gold or mother-of-pearl buttons.

They’re also usually around an inch shorter than suit jackets, which makes combining them with chinos appear less disjointed and more proportionate.

Although blazers are suitable for wearing with even regular, casual pairs of chinos, wearing them with more “formal” looking pairs of chinos will work even better.

Going a step more casual yet is the ultra-versatile sports coat.

These are even less formal than blazers. They fit even looser, allowing you to wear layers underneath if desired.

They often have a rough and rugged texture, usually with no sheen whatsoever. Tweed is a common fabric used to make them.

You’ll often find traditionally casual features such as elbow patches and ticket pockets on sports coats but not blazers.

Sports coats and chinos are generally considered a match made in heaven. The versatility of both often allows for any sports coat to be worn with any pair of chinos with ease.

It’s common to find this classic combination in semi-casual and business casual occasions and settings such as office parties, garden parties, sporting events, and more.

Are There Any Exceptions To The Rule?

As always, there are exceptions to the rule. There are indeed rare instances where wearing a suit jacket may look acceptable when worn with chinos.

This is, of course, subjective. One man’s “acceptable” is another man’s “despicable”.

But there are certain types of suit jacket which may well work as a blazer.

In other words, they’d work when worn separately to the suit pants they were meant to be worn with. For example, with chinos.

Here are some features that may suggest this is possible:

It’s important to remember that it will always be a risk. But if you had a full suit and you were intent on wearing the jacket with your favorite pair of chinos, looking out for these features should help guide your decision.

If they appear to fit the profile, there’s a pretty decent chance it’ll work.

In general, it’s best to avoid wearing a suit jacket and chinos to weddings without exception. This is simply because the risk of a mismatch is simply not worth taking.

Weddings won’t always necessarily require a formal suit. There are plenty of weddings where the dress code is semi-casual.

A jacket and chinos may be the ideal combo for the occasion.

But a blazer or a sports coat would be far more appropriate for an occasion where you really want to be looking your best, regardless of how casual or formal the dress code is.

Wearing an awkward suit jacket and chinos combo at a wedding is never a desirable situation to be in.

Play it safe here and save the experimentation for less important occasions and settings.

A misstep in style isn’t the end of the world. You aren’t exactly hurting yourself or anyone else.

But it’s always frustrated me how you could dress immaculately 95% of the time and it’s the 5% of fashion errors that people seem to dwell on.

Wearing suit jackets with chinos may seem harmless enough, but it’s little missteps like this that accumulate over time and lead your style choices in the wrong direction.

Gaining a full understanding of the differences between suit jackets, blazers, and sports coats is an excellent starting point. After this you can learn the circumstances in which each should be worn as well as what they should be worn with.

Hopefully, after reading this article you have a pretty good idea. Have fun and experiment while sticking to these basic principles that won’t ever steer you wrong.