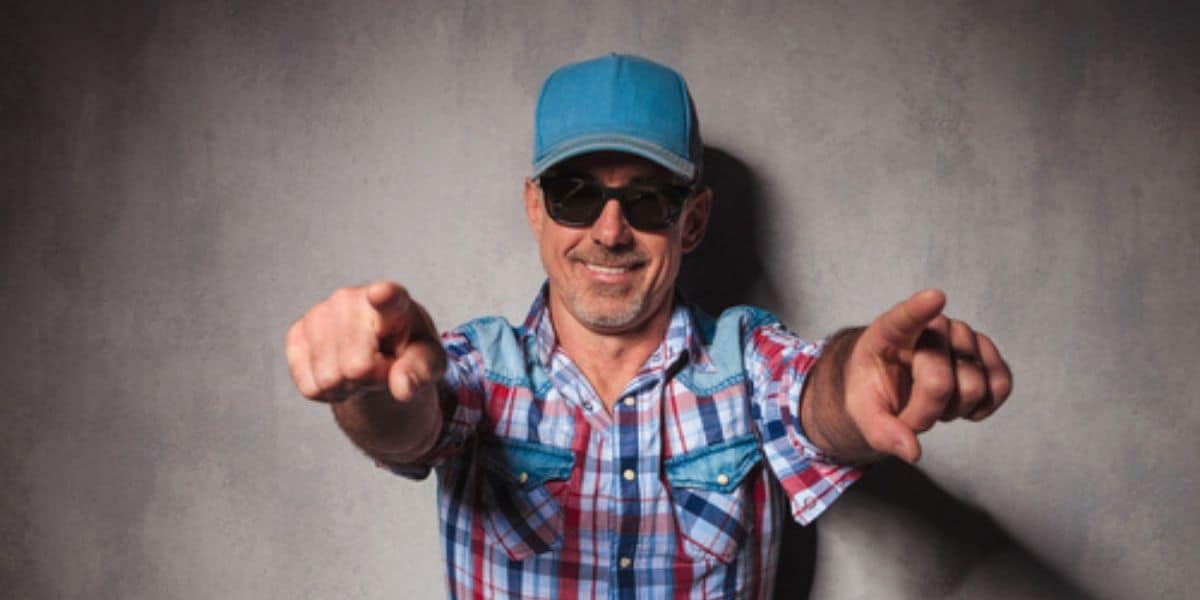 Bald men have had a complex relationship with hats for as long as they’ve existed. A lot of the time it works, but occasionally it doesn’t. Sometimes this is due to the hat and sometimes it’s due to the wearer. So, can bald guys wear trucker hats?

Yes, bald guys can wear trucker hats. But any bald man should ensure that the trucker hat is weather-appropriate, worn with confidence and not shame, and works with his other clothes and overall aesthetic.

I’ll be talking about these factors and others a bit later on.

It’s important to understand that the difficulties men face with hats are often due to the way in which they are worn as opposed to being bald.

That’s what’s so fascinating about baldness – most of the problems that bald men perceive themselves of having are self-inflicted.

Bald men who approach fashion and life in general with confidence, flair, acceptance, and a touch of defiance often do very well for themselves.

Let’s dive a little deeper into the topic of trucker hats and baldness.

What Exactly Is A Trucker Hat?

It’s important to first get a good understanding of what a trucker hat actually is. A lot of people confuse them with the traditional baseball cap, which is quite far from the truth although they certainly do share some similarities.

The modern variation of trucker hats we see and think of today first came into circulation in the 1970s. They were given away at truck stops by companies looking to advertise their products.

It’s characterized by its high dome due to the foam at the front being tall and stiff. The hat is also known for its adjustable snap at the back.

5 Factors For Bald Men To Consider With Trucker Hats

Trucker hats were designed with breathability in mind. The plastic mesh paneling is ideal for allowing a gentle breeze to slip through and fall upon your bald scalp when it’s needed the most.

For this reason, it really is great for hot weather. A crucial benefit of wearing a hat in the warm sun is protection against sunburn and the other harmful effects of the sun on a bald scalp.

However, there’s nothing worse than an overbearing hat in the summer. The discomfort alone might put a bald man off from enjoying the great outdoors.

A trucker hat allows bald men to enjoy the sun while remaining safe and comfortable as well.

Going along the same train of thought, I’d advise against wearing a trucker hat in cold weather for obvious reasons.

A bald head doesn’t have the benefit of having hair to protect against the cold. Losing heat from the top is a significant problem and a warm hat is important.

The breathability of a trucker hat would allow too much heat to escape and wouldn’t provide enough warmth.

A trucker hat in the cold weather would also look awkward from an aesthetic perspective.

It’s interesting how the same outfit can look incredible in one context while looking awkward and unfashionable in another. But that’s a topic for another article.

2. Wear It With Confidence

One reason bald men have such a complex relationship with hats in general is that they’re often used for the wrong purpose.

Put simply, a bald man should only wear a hat as a fashion accessory or for protection against weather conditions. It should never be worn as a feeble attempt to hide the fact that they are bald.

It’s no secret that a lot of bald men have trouble coming to terms with their falling follicles. Although this is natural, it’s out of keeping with the fact that baldness has been in trend for a very long time.

A bald man can ooze confidence and masculinity, but a large part of this comes with acceptance of the baldness itself.

A trucker hat should be worn as a fashion statement or for the sake of sun protection. It should never be worn to try and hide a bald head.

The fact that they would do a poor job of hiding it in the first place is irrelevant. The principle of not hiding is more important.

It can be quite obvious when a bald man is using a trucker hat to try and hide his baldness. Wearing it inappropriately is usually a tell-tale sign. The hat may be entirely out of sync with the rest of the outfit, or worn when inappropriate for the weather.

The fact that it’s worn all the time is also a tell-tale sign. An excellent habit to get into the practice of would be to take the trucker hat off when you’re indoors.

For one, this is generally considered polite. But it’s also an opportunity to show off your baldness and to let there be no doubts.

People need to know that you’re bald as it’s part of who you are. It shows confidence, maturity, and acceptance. Plus, people will know that the hat isn’t an attempt to hide anything. It’s simply the accessory of a fashionable, style-conscious man.

3. Make Sure It Fits With Your Outfit

It can be tempting to grab the first hat you see when heading out and clumsily slip it over your head. If it’s the only hat you’ve got, you literally don’t have a choice.

That’s why it’s important for a bald man to have a collection of hats at his disposal. The odd yet widely held notion that one hat could sync with all outfits needs to be forgotten.

As I mentioned earlier, the trucker hat should be viewed as a fashion accessory. An accessory needs to work well with the rest of your attire.

So, ask yourself what look you’re going for.

If you’re going casual, a trucker hat does work well with basic jeans and a T-shirt – particularly V-Necks.

Trucker hats with more neutral or darker colors can also work well with dressier outfits. For example, with a long-sleeve button-up shirt.

But a large part of syncing your trucker hat with your clothes is color coordination. The specifics of this are beyond the scope of the article. Just know that it’s important and may be a reason to own trucker hats in more than one color.

Camo trucker hats are very popular, particularly among the outdoorsy community. It’s a great example of how a trucker hat can be used to express your own individuality and personality.

A bald man should use trucker hats as an opportunity to express himself and establish himself as a fashion-conscious individual.

There are trucker hats with domes that are less tall and less prominent. These do come with their benefits. There are two main ones to know about.

One is versatility. Although the traditionally tall dome of the trucker hat is iconic, it can make you stand out from a crowd. Sometimes, this isn’t what you want.

If you’re looking for a more subtle look, while still enjoying the breathability of mesh paneling, choosing a trucker hat with a less prominent dome may be a good option for you.

The other benefit is an interesting one.

I’ve explained the importance of taking the trucker hat off when necessary.

When the tall dome of a trucker hat is removed from the head, the contrast can be quite stark and jarring. There’s no hair to add any height and the difference can look surprising to people.

Choosing a trucker hat with a shorter dome reduces the distance between the bald scalp and the top of the hat, leading to a more natural appearance when transitioning from hat to hat-less.

There’s a common misconception that trucker hats are one-size-fits-all. This isn’t true.

Yes, trucker hats do have snapbacks allowing for adjustability and this is a great thing. However, they typically only allow for around 2 inches of adjustability.

When you don’t have hair to fill out the trucker hat, it’s important to ensure that you get the correct size.

Whip out your tape measure and measure your head circumference. Read the specific sizing details of whatever trucker hat you’re purchasing and make sure you fall within the range of adjustability.

If not, you may need to get one custom made. This isn’t a problem – there are a lot of companies that could do this for you.

A poorly-fitted trucker hat can look very awkward and not fashionable at all. Be sure to take sizing seriously before you make the purchase.

Bald Or Not, Are Trucker Hats Even In Fashion?

Trucker hats have been around for a long, long time. The predecessor of the modern trucker hat – the Mechanic’s Cap – was worn by truckers from the 1930s until the 1970s.

As you probably already know, old styles have a tendency to make comebacks in odd and unexpected ways.

In the early 2000s, celebrities such as Ashton Kutcher and Justin Timberlake popularized the trucker hat among the mainstream youth.

This modern resurgence has continued to grow thanks to the efforts of many other celebrity advocates.

Although this may seem at odds with the blue-collar history of the trucker hat, this widespread adoption of a truly iconic American fashion accessory can only be seen as a good thing.

That was a whirlwind run-through of how a bald man should approach trucker hats. It can look fantastic and they’re certainly in trend.

But as with most topics in men’s grooming, there are caveats and factors to consider before making decisions.

Not all trucker hats are made equal, and not all conditions and contexts are suitable for trucker hats in the first place.

Hopefully, this article will help you choose the perfect trucker hat to be worn under ideal circumstances.