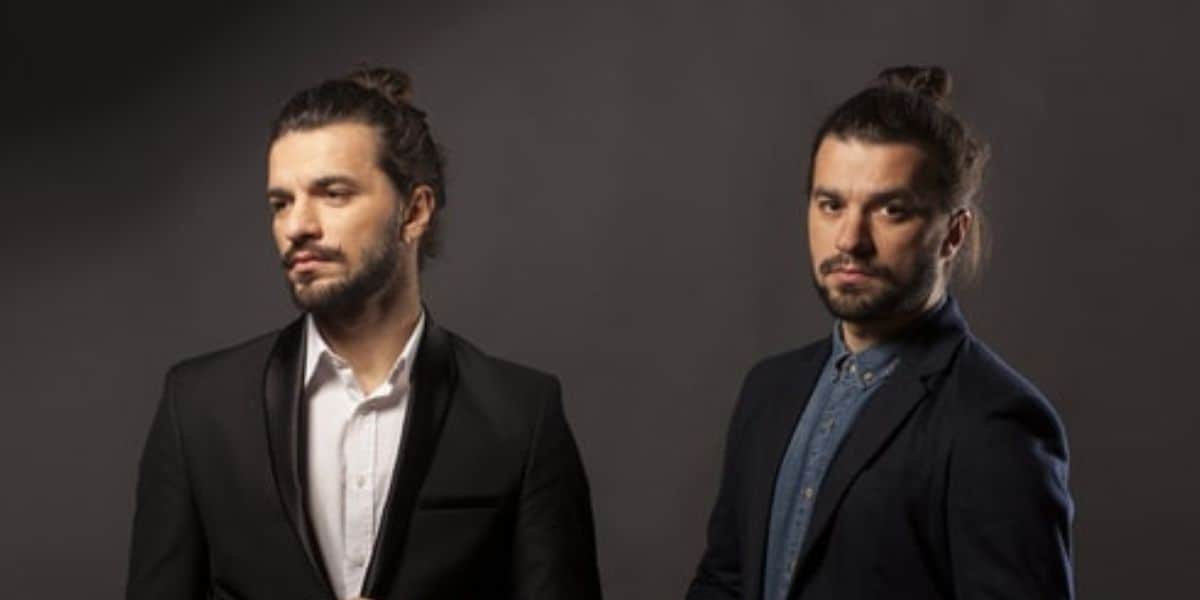 Dressing to impress isn’t the hard part. Men with long hair often struggle to know what to do with it when the occasion asks for formalwear. So, can you wear a man bun with a suit?

Yes, most man bun styles are perfectly fine combined with a suit. It could be argued that the man bun is potentially the neatest and tidiest way to style long hair, making it a perfect option for those situations where you want to dress formally.

What you’re aiming for is a hairstyle that’s in line with clothing as traditionally formal as a suit.

Regardless of whether we’re talking black-tie, business professional, or cocktail attire, a suit will always be formal or semi-formal at the very least.

There are plenty of different variations of the man bun around these days. Some of them do look more formal than others.

I’m about to teach you everything you need to know, including 4 tips on combining man buns with suits in the most effective and attractive ways possible.

What Does The Man Bun Look Like With A Suit?

As you can see, when styled effectively, it looks elegant, subtle, and sophisticated.

It doesn’t look out of place or out of line with the formality of the suit. The style as a whole just works – it’s simple.

Bearing these tips in mind should help guide you in making your styling decisions. It isn’t rocket science, but there are definitely some dos and don’ts you’ll want to stick to.

Going back to the picture above, it definitely helps that the guy wears it with serious confidence.

The thing about growing long hair as a man is that it usually makes you stand out a little. By no means is this a bad thing – in fact, it’s often the purpose behind it in the first place.

Being unique is something to strive toward and not shy away from.

But sometimes swimming against the tide does present some difficulties. Formal occasions that warrant suits is a common one.

It’s easy to feel self-conscious or out of place at formal occasions where you may feel that shorter hair would be more “appropriate” or “suitable”.

But this self-consciousness just isn’t necessary in the present day. Diversity in appearance and identity is at an all-time high.

Self-expression through style, grooming, and fashion is encouraged.

Just know that it’s fine. You don’t need to feel self-conscious about having long hair or styling a man bun when wearing a suit and going to formal occasions.

2. Tailor The Neatness Of The Man Bun To The Occasion

As I mentioned, there are lots of man bun variations. So many, that it really isn’t worth knowing about all of them.

Frustratingly, many of them are simply made up off-the-cuff.

But two broad man bun categories you should really know are “neat” and “messy”.

A “neat” man bun is knotted in a tidy and even manner.

There will be fewer hairs sticking out of the bun. It’ll all just look “tighter” and more meticulously wrapped within the knot.

A “messy” man bun, on the other hand, is exactly what it says on the tin.

Interestingly, it can take a significant amount of time making a “messy” man bun look the way you want it to.

“Messy” doesn’t just mean knotting in a hurried and haphazard sort of way. There’s a method to the madness.

Of course, this method does vary widely. One man’s messy could be another man’s neat. In addition, you’ve got different versions of the messy man bun.

But ultimately, they share the common feature of not having all of the hair so tightly and neatly wrapped within the bun.

You’ve got clumps sticking out, possibly a few twists around the bun itself. Sometimes you’ve got a Jon Snow “high baller” style cascade of long hair at the back.

So, how is this relevant to suits?

Well, it may seem obvious but if you’re looking to make sure that man bun isn’t out of sync with formalwear such as a suit, it may be best to go neat.

Neat man buns may just be a safer bet when dressing for a formal occasion. Just like you’re more likely to wear a dry-cleaned blazer, moisturize, etc.

It just makes more sense to keep everything neat and tightly knotted.

Save those messy style variations for a different occasion. That’s the beauty of long hair. You’ve got the benefit of endless versatility; be sure to make use of it.

3. Ensure The Hair Is Properly Groomed

It probably goes without saying, but I’ll say it anyway.

As neat as you may strive to tie that man bun, if the hair itself is unclean and poorly-groomed, you’re fighting a losing battle.

If you don’t have a good foundation and platform to work with, there really isn’t any point.

Well-groomed and maintained hair is so much easier to tie into a man bun. It’s also so much better suited to formalwear.

Before you tie that man bun, ensure it’s cleaned. A dollop of a gentle shampoo and conditioner will go a long way.

Towel-dry it gently and tie it while it’s slightly damp – it’ll make it easier to group together and keep in place within the knot.

Brush the hair regularly to reduce split-ends and redistribute natural oils. It’ll give the hair a much healthier look while also letting you tie the bun a lot easier.

When wearing a suit, grooming is just as important as selecting the perfect ensemble.

Make sure that your hair fits the part.

4. Don’t Be Afraid To Use Product

A hair product can be a man-bunned man’s best friend. It saves time and enhances the end-result.

It can make it look fuller, thicker, and give it a nice, healthy-looking sheen.

As long as it’s not overdone, you’re golden.

Examples would include volume creams and sea salt sprays.

Anything that makes the hair easier to group together, look fuller, and reduce flyaways. It may not be something you want to apply every day.

If you can do without it, that’s absolutely fine.

This will probably include each and every time you feel the need to wear a suit.

Don’t be afraid of it. Use it sparingly but makes sure you use enough to get the job done.

Man Buns With Beards And Suits

Man buns and beards often go hand-in-hand. One reason may be that the type of men who style man buns are just more likely to grow a beard.

Another is that the combination just works.

Either way, when wearing a suit you’ll want to take the formality of the occasion or setting into consideration.

If you’re looking to go formal, make sure the beard is neatly groomed and styled in the same way you would with your man bun.

It should be trimmed evenly, shaped, and sculpted effectively, and the borders (neckline and cheek line) should be well-defined.

Sticking to these basic beard grooming habits should allow you to take advantage of the main benefit a beard would give to any man rocking a man bun.

It frames the face and adds balance.

Tying a man bun can sometimes exaggerate the shape of a face. With the hair grouped, tied back, and knotted, a round face can look rounder, a long face can look longer, and so on.

You don’t have the benefit of being able to quiff the hair up or style it in a way that adjusts and accounts for this.

A beard can be used to do this for you.

A more pointed beard with more length on the chin can make a round face look less round, for instance.

As long as a beard is well-groomed, it can be a fantastic way to compliment a man bun, regardless of whether or not you’re wearing a suit.

Your wedding is one of those occasions where you probably want to dress as well as you possibly can.

That suit is going to be one of the best and possibly most expensive ones you’ll ever wear.

Everything from your cufflinks to the perfect pair of black Oxfords will be carefully selected and put together in the most impressive way possible.

You’ll want to make sure your hair doesn’t let the ensemble down.

Going back to the first tip in this article, lose your sense of self-consciousness.

Man buns are perfectly acceptable on a wedding day and it shouldn’t impact your confidence or enjoyment of the occasion.

But the same principles apply. You’ll want to steer away from “messy” and toward “neat” man buns to really play it safe.

Make sure the hair is clean, brushed, and properly managed. This is a perfect example of when you’ll want to bust out some product to really help you tame those flyaways.

But most importantly, just relax and enjoy. Stick to basic principles and grooming habits and it’ll look absolutely fine.

Don’t be afraid to experiment and find a style of man bun you feel looks “formal” and “neat” by your standards.

As I mentioned earlier, take advantage of the versatility that long hair brings and try stuff out.

There is an endless number of style variations you could potentially try out.

That’s definitely part of the fun.

Mustaches are making a big style comeback - and with good reason, as they are a classic look for men.  But mustaches can become unruly if not properly cared for as they grow out. As a result,...

It’s tough to get much shorter than this. There’s beauty in simplicity and that’s definitely true when it comes to this length. You’re about to learn everything you need to know about the 1mm...