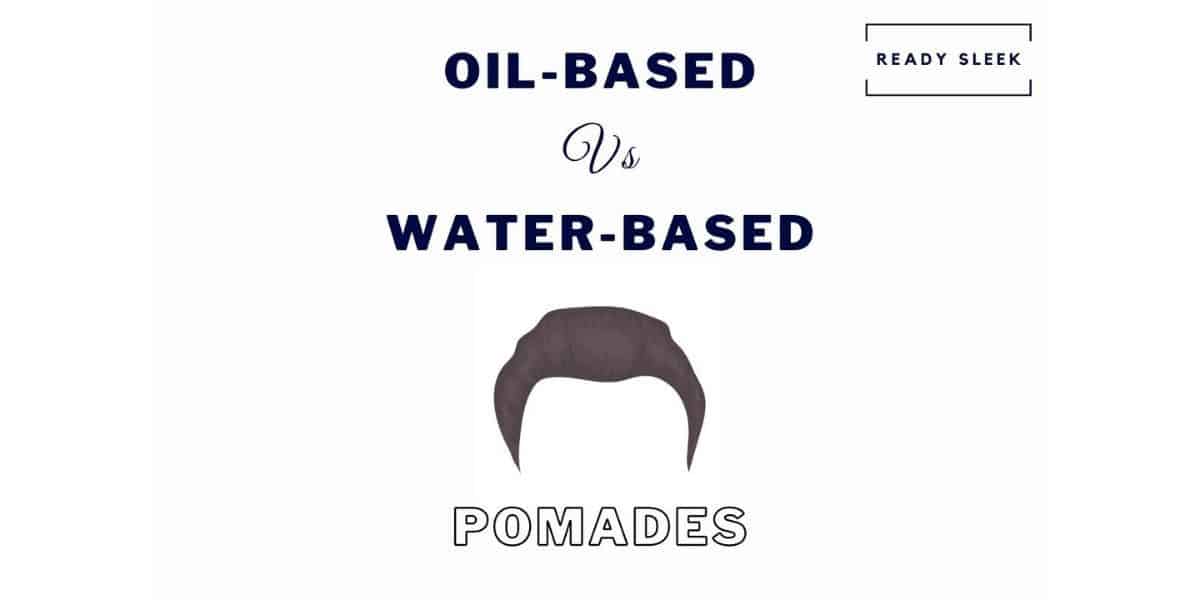 A pomade would be the perfect option for a man looking for a slick, well-defined style with a glossy finish. But they aren’t all made equal. So, what’s the difference between oil-based and water-based pomades?

Having a good understanding of the key differences between these two goliaths of hair styling will make the difference between choosing one that’s right for your hair and one that’s wrong.

Bear in mind that ultimately all pomades should be expected to give you the ability to slick the hair and give you a shiny, glossy finish.

The way in which they do that, however, does depend on what they’re made of.

I’m going to talk through 9 key differences between oil-based and water-based pomades and then explain how to choose between them.

These differences may not be equally important to you, but there’s a very good chance one or more of them will lead you to choose one type over the other.

Why not start with the most obvious difference?

Oil-based pomades will have an “oily” ingredient as its core, such as petrolatum, petroleum, lanolin, beeswax, or paraffin.

Water-based pomades will have water as their base and will, as a result, be water-soluble. It will also often have oils and wax-based ingredients such as castor oil and lanolin but much less of them.

In addition, they often contain glycerin which helps to absorb water.

The list of ingredients in water-based pomades is often longer, containing a wider range of chemicals than oil-based pomades which are more minimal in what they include.

You’ll notice how easy it is to scoop it out of the jar and how quickly it breaks down in between your palms.

It feels just as smooth to distribute through your hair. There will be minimal tugging and pulling, with usually only very slight resistance.

Oil-based pomades, on the other hand, are more work to apply. It takes a more dedicated and committed pair of hands to regularly apply it through the hair.

It’s tough, with a firmer and waxier consistency. You’ll feel more resistance even as you scoop it out of the jar. Then, you’ll need to warm it up in between your palms for longer to emulsify and break it down.

With the heavier oil-based pomades, you may even need to use some heat to help you break it down; eg. using a blow-dryer.

Even after a thorough attempt at breaking it down, you’ll still feel more resistance as you apply it through your hair than you would with a water-based pomade.

It isn’t the case that one of them produces a stronger hold than the other. Both of them can potentially give you a strong, heavy hold. Each category contains products ranging from light to high hold.

How the two categories of pomade differ is in the nature of their hold.

This is important when it comes to restyling.

A lot of men like the option of a pliable hold; one which doesn’t dry hard and that you’re able to restyle using your fingers or a comb throughout the course of the day.

Oil-based pomades allow for this and give you a lot of flexibility in this respect.

Think of the ‘50s “greasers” who whipped out their combs and adjusted their slick-backs and pompadours in the middle of the day. This would only be possible with an oil-based product.

Water-based pomades, on the other hand, do dry hard and don’t allow for restyling. In a way, it’s almost like a timer is set from the moment you apply it. Some of them dry very quickly – i.e within the space of a few minutes.

Once it’s dry, you really won’t be able to adjust it without softening it first using water. But once this is done, you’ll need to apply more pomade to set it again.

This is why many compare them to hair gels. The stiff hold of poorer-quality water-based pomades can sometimes feel crunchy, flake, and look blocky.

Having said all this, there are plenty of men who like the option of a “set it and forget it” water-based pomade that they can rely upon for drying stiff and keeping their hair in place.

Each to their own.

On average, oil-based pomades produce a stronger shine than water-based pomades due to the greater concentration of greasy ingredients.

Again, think back to the ‘50s with those ultra-slick pompadours. That level of sheen wouldn’t have been possible without a good ol’ fashioned, traditional oil-based pomade.

In addition, you should expect the shine of an oil-based pomade to last longer than that of a water-based one.

Oil-based products keep their shine; potentially even for days, depending on how much is used and how little of it is washed out.

Water-based pomades do unfortunately lose their shine quicker over the course of the day. Of course, how long it takes will depend on the quality of the product being used.

But in general, this should be expected.

The hold of an oil-based pomade would be more resistant to the weather than that of a water-based pomade.

Due to the water-soluble nature of water-based pomades, exposing them to the rain could potentially ruin all of the hard work you did that morning.

It’s frustrating because once it’s wet, you’re pretty much done. You’ll need to dry it off and apply some more product if you’d like to restyle.

Oil-based pomades, in contrast, offer more protection. Rain will most likely have some impact on the hold, but restyling it and getting it back in order is no big deal.

That’s the beauty of a pliable, re-styleable hold.

This is one of the major appeals of water-based pomades for a lot of men. They love the convenience of being able to rinse out the product easily and sleeping with clean hair each night if they want to.

Usually, you wouldn’t even need to use shampoo.

Oil-based pomades are harder to wash out, especially the heavier ones. You’ll need to use shampoo and you may even need multiple shampoo washes to really get it out of your hair.

Although this is generally seen as a drawback, some men actually like this. They like the fact that you have some residual pomade in your hair even after a wash because it means you’ll need to use less of it next time.

This is called build-up and it’s a classic feature of oil-based hair products.

In general, the average cost of a water-based pomade will be higher than that of an oil-based pomade.

The main reason for this is that they usually have more complex formulations, with a wider range of chemicals and ingredients.

As I mentioned earlier, oil-based pomades are more minimalist; they have relatively few ingredients and are usually cheaper to make.

Overall, you won’t notice a huge difference in price between the two types, but you’ll most likely notice some difference.

More important than price is how long a tub of pomade will actually last you. An expensive hair product may be worth it if it’ll last you the long haul.

In general, you can expect a jar of oil-based pomade to last you longer than the same amount of water-based pomade.

Oil-based pomade is more resistant to being washed out. Apply some on one day and you can bet that you’ll have some of it left over the next morning, despite washing your hair.

When it comes to value for money, this is great.

It means you get more value for every bit of pomade you use – it simply lasts you longer. One application of pomade could potentially be used for styling over multiple days unless you had an especially thorough shampoo rinse.

Water-based pomades, however, get rinsed out with no trouble. In addition to this, even if you managed to go a couple of days without rinsing, you’d still lose enough shine to want to apply some more.

Because of this, you’ll find that you need to apply it more frequently. You don’t get build-up, so you’ll need to use the same amount each and every time.

Finally, you can expect more variety with oil-based pomades. There are all sorts you can buy, ranging from light to heavy hold and from medium to high shine.

Water-based pomades are a little more restricted in what’s available. You can expect similar effects from all of them; a hard, shiny hold.

This isn’t a bad thing – for a lot of men, it’s exactly what they need.

But a pomade purist, connoisseur, or collector would prefer being able to choose between different strengths and types of oil-based pomades according to what they feel like wearing on the day.

Oil-Based Vs Water-Based Pomades: How To Choose

Consider this as more of a summary of what I’ve explained above. Use the differences I’ve listed to pick between the two.

If you find that one type isn’t for you, just try the other type. Trial and error is an important aspect of men’s grooming.

But this article has hopefully allowed you to skip that part and go straight to selecting the correct type of pomade based on your specific preferences. 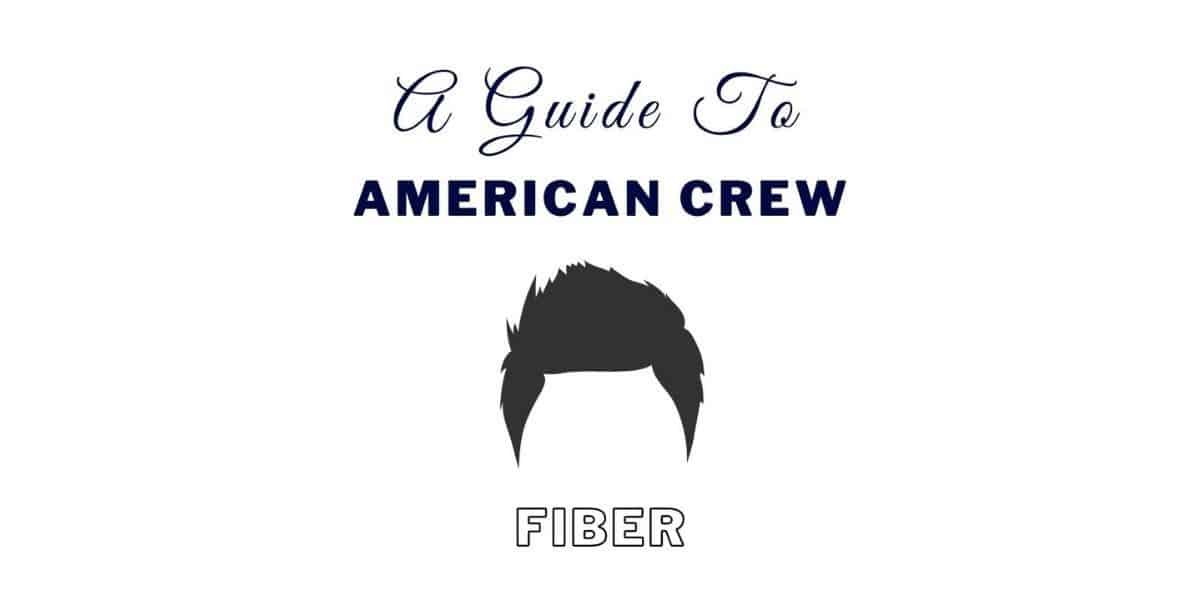 American Crew Fiber: Grooming Guide And How To Use
← Read Last Post 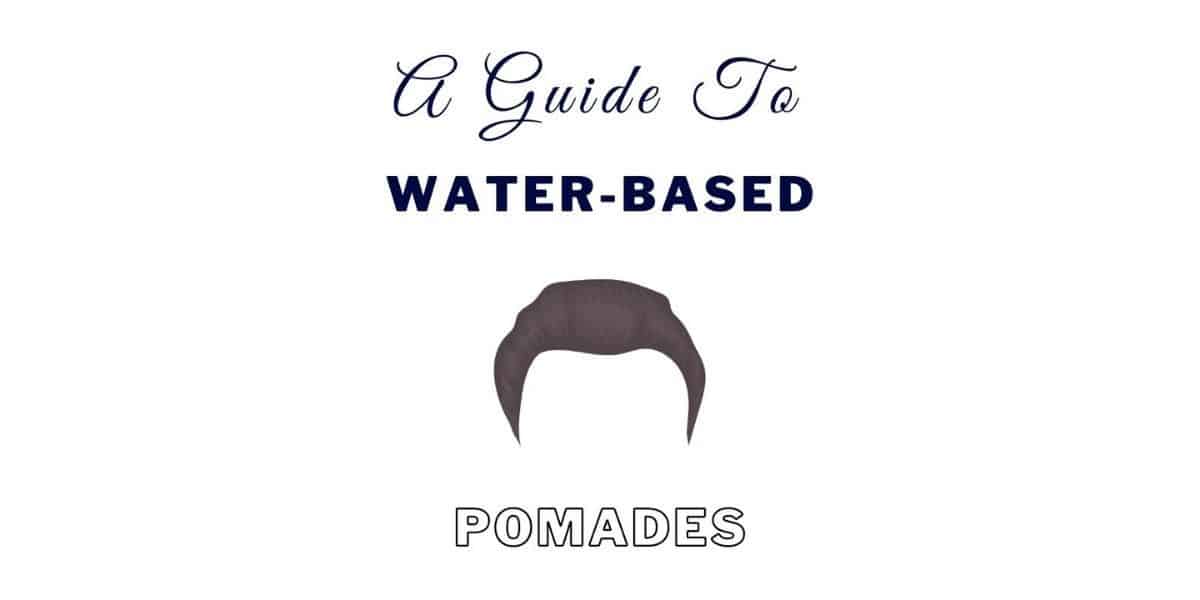 Water-Based Pomades: A Complete Guide And How To Use
Read Next Post →
Comments are closed.