This argument has been going on for decades. If they’re even different, which one is better; the goatee vs the Van Dyke?

A more traditional, full goatee has the benefits of being lower maintenance and more versatile. But the typically more eye-catching Van Dyke is often considered to be more sophisticated and better suited for men looking to make a statement. In that respect, a full goatee is more “low-key”.

The Van Dyke is also excellent for men with patchy beards, being one of the more popular disconnected goatee styles.

Finally, if you’re a lover of the mustache, it’s hard to ignore the prominence it’s given with the Van Dyke.

Those were the cliff notes, but I wanted to delve deeper. These two styles have been the source of so much confusion over the years and I wanted to set things straight as best as I could.

I’ll first go into more detail about what the key differences between them are. Without getting to grips with this first it would be impossible to compare them effectively.

Afterward, I’ll talk you through some important factors to consider when trying to decide between the two. By the end of this article, it’ll be a walk in the park.

The Difference Between A Goatee And A Van Dyke

The Van Dyke can be considered a goatee style due to this very fact, but the styling of the mustache and chin beard are what make it unique.

To fully understand this fundamental principle it’s important to lay out the difference between a “classic goatee” and a “full goatee” first.

A classic goatee is a goatee in its most traditional form. It consists of a chin beard and a chin beard only. There is no mustache whatsoever. Abraham Lincoln would be a famous example.

A full goatee rocks a chin beard as well, but it also consists of a mustache. The mustache and chin beard may or may not be connected to each other. In modern men’s grooming, this is what most people think of when they hear the term “goatee”. Goatee purists, however, may disagree.

The reason the Van Dyke can be considered a goatee style is that it consists of a chin beard and a mustache – much like the Full Goatee. There is certainly no hair on the cheeks. The mustache and chin beard are disconnected, and the mustache is often curled into a handlebar.

The chin beard is also pointed into a downward-facing triangle and usually merges into the soul patch beneath the bottom lip. This produces almost an anchor shape.

As you can see, the key differences between the modern-day understanding of the “goatee” and the “Van Dyke” are stylistic. Ultimately, they are very closely related.

To summarise, a Van Dyke is a goatee style where:

Goatee Vs Van Dyke: Which One Should You Choose?

Now that you have a deep understanding of what these styles really are, it’s time to decide between the two. I’ve outlined five factors to consider when trying to determine which of these styles would suit you best.

A couple of these factors may be more important to you than the others. That’s perfect because it’ll make the decision so much easier for you.

To clear things up from the outset, we’re mainly comparing the Full Goatee and the Van Dyke here (as described above).

The two main factors that determine how difficult a style is to maintain are the length and complexity.

It’s no surprise that the longer a style is, the more upkeep it’ll require. Oiling, brushing, combing, balming, etc. The longer a beard gets, the more important this stuff becomes.

The more complex the style, the more often you’ll need to keep it in check. You may also need to use more product to hold it in place. Balms, waxes, pomades, etc.

When it comes to length, the Full Goatee and the Van Dyke are on a level playing field. The styles work with both longer and shorter facial hair. In fact, they even work with stubble.

But when it comes to complexity, the Van Dyke does come out on top. Or on bottom – depending on which way you look at it. There’s just more to it than a simple goatee.

A Full Goatee is technically just a patch of hair surrounding the mouth. The Classic Goatee is just a tuft of hair on the chin.

But the Van Dyke requires a bit more technical skill. The mustache and chin beard need disconnecting in a way that allows for further styling.

The mustache will need parting, combing, as well as potentially balming in order to style a structurally sound handlebar.

The chin beard needs sculpting into something a little pointier. Like I mentioned earlier, into a downward-facing triangle that blends nicely into the soul patch.

Don’t get me wrong – it isn’t rocket science. But when the styles are compared, the Van Dyke will need a little more maintenance than a standard goatee.

Patchy facial hair plagues such a vast number of men that it can almost be considered normal. It isn’t something to stress about, because you’d never be alone.

Patchy-bearded men have used their years of hardship to build workarounds and form solutions to common hair density issues.

A common culprit area is the hair that’s supposed to connect the chin beard and mustache. Some men just don’t have this, or have very patchy hair in this region.

The cheeks are often patchy as well – it’s often where the facial hair is thinnest and most sporadic.

Disconnected goatee styles are perfect in these situations. Patchy cheeks aren’t a problem because it’s all shaved off. The fact that the mustache and goatee can’t connect is irrelevant because the style doesn’t require them to.

The Van Dyke is a perfect example of a stylish, disconnected goatee style. It emphasizes the typically thick areas and disregards the thin areas of facial hair.

To conclude, if you’ve got a patchy beard that refuses to connect where you want it to, seriously consider a Van Dyke.

What I mean by “versatility” is how well a facial hairstyle fits in different scenarios in contexts. Casual, formal, work, home, weddings, job interviews, walking down to the local grocery store, etc.

Although attention is something some men thrive upon, there are certain situations in which a facial hairstyle may just look out of place.

I would say both of these styles were objectively versatile. You wouldn’t have much trouble wearing these styles in any of the situations above.

But the Full Goatee is so universally accepted and loved that it’s almost become a standard. It’s so common that it isn’t even noticed.

You can be so sure that the style wouldn’t draw a negative reaction that you could quite comfortably stroll into a job interview knowing it won’t be a problem.

The Van Dyke, on the other hand, is generally considered to be more flamboyant. It’s stylish, sophisticated, and usually best suited for the more formal social events.

Overall, a standard goatee is a safer bet than the Van Dyke when you aren’t sure whether a style will be alright for a particular occasion. For this reason, I’d say it was more versatile.

But ultimately, whether or not you care about the opinions of others is a more personal decision. One of the best things about beards in general is that they’re for you, and not for them.

If you’re a fan of the ‘stache, go for the Van Dyke – it’s as simple as that.

The goatee vs Van Dyke battle will rage on for decades to come, but ultimately, some men just love mustaches more than others.

The mustache is a crucial component of the Van Dyke. A Van Dyke without a handlebar can’t really be called a Van Dyke, in my opinion.

If you’re looking for a style that embraces and reveres the mustache in all its glory, the Van Dyke may well be the one for you. Those handlebar curls are just so distinctive.

A Classic Goatee lacks a mustache entirely, and the Full Goatee connects it to the chin beard. It isn’t an important feature of these styles.

So if you’re a mustache lover at heart, strongly consider the Van Dyke.

As I mentioned earlier, some men like attention more than others.

But this popularity has also made the style a little bit less interesting. It’s so common that it can be easy to ignore completely.

For some men, this is ideal. They love wearing a goatee but don’t want it to be the focus of their aesthetic appearance.

They may just love the way it can elongate their otherwise round or square-shaped face, for instance. It doesn’t have to be because they want to be considered “the bearded guy” in the room.

In contrast, the Van Dyke is a more striking style. People will notice it, there’s no doubt about it. This is especially the case if the mustache is curled into a handlebar – I mean, that’s pretty hard to miss.

It will most likely draw some comments – mostly positive, but perhaps even some negative. It may even turn some heads.

A man with a Van Dyke usually does want to be considered “the guy with the beard”, and that’s perfectly fine. It’s understandable, to be honest. Striving for stylishness should always be applauded.

It’s clear that personality will play a role. If you’re more introverted, shy, or simply don’t like being the center of attention, a Full Goatee may be more appropriate for you. It’s a phenomenal style that’s stood the test of time and won’t draw too much unwanted attention.

However, if you’re on the more flamboyant end of the spectrum, the Van Dyke may be a perfect fit.

There are also situations where a typically introverted person wants to make an entrance and stand out. Carving their goatee into a Van Dyke may be a simple, yet perfect way to achieve this.

As I mentioned earlier, this battle will rage on. People will argue over which is better, but you’ll more commonly hear disagreements over the definition of each style.

Hopefully, this article has cleared a lot of it up. You’ve learned what the styles consist of, what they look like, and what they each have going for them.

If you’re finding it hard to decide, try them both out. If you’ve already got a Full Goatee (as many people do), try carving out a Van Dyke one day. You may end up absolutely loving it, which is great.

But if you decide it really isn’t for you, all you have to do is shave it off. Trust me – it’ll grow back.

Have fun with it. 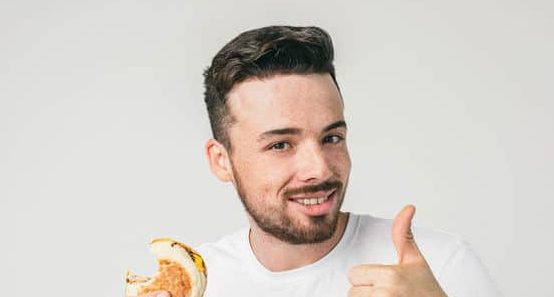 The Goatee With Chinstrap: Pictures, Tutorial, Benefits
Read Next Post →
Comments are closed.