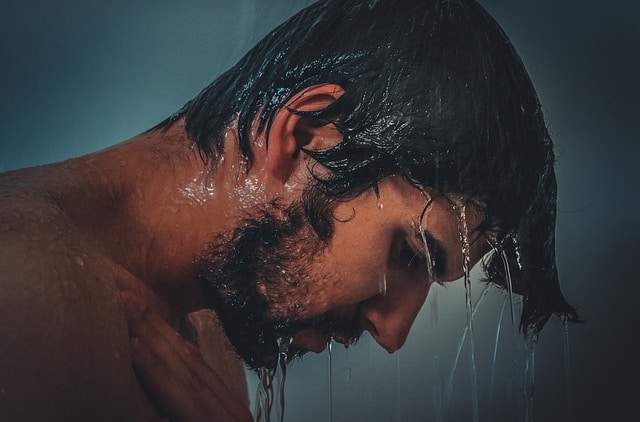 Whether to brush your beard when it’s wet or dry is a very common question. Even the most seasoned of beardsmen can sometimes get confused about which path is best to take. A more specific question that’s often asked is, should you brush your beard in the shower?

Brushing your beard in the shower is something almost always best avoided. The main reason for this is that brushing wet hair leads to breakage. It may often seem like the simplest and most comfortable solution. But it’s important to bear in mind that it slowly but surely causes long-term damage.

Beard brushing has become an essential part of the bearded man’s grooming routine. In fact, the earlier you start brushing

It helps to keep your beard healthy and looking its best. But when done incorrectly, it can do more harm than good.

Why you should never brush your beard in the shower

The term ‘brushing’ is sometimes used interchangeably with other words such as ‘combing.’ These are very different tools and have very different uses. When we refer to brushing, we mean brushing with a boar bristle beard brush .

Most grooming experts agree that you should never brush your beard when it’s wet. Not even when using a high-quality brush.

Like I said earlier, it causes breakage, split-ends, and unnecessary hair loss.

If you reach for a brush every time your beard is wet, chances are you’re going to do it too much. Brushing too often can cause just as much damage as brushing wet wet.

I always recommend brushing your beard after applying beard oil

. It helps to distribute the oil beautifully, leading to much more effective results.

Another problem with shower brushing is that this becomes impossible. Showering will remove any beard oil you’ve tried to apply before it’s had a chance to work it’s magic.

Why does brushing wet hair cause breakage?

When hair gets wet, it stretches. As the hair is pulled, it’s under increased pressure and more prone to breakage.

When your beard is wet, the bristles of a beard brush put a lot of tension on your hairs, causing hairs to snap, split, or be pulled out.

Running a beard brush (yes, even a high-quality one with natural bristles) through your wet beard will damage your facial hair.

The more strands you pull out, the more your beard’s health (and looks) will suffer.

When you brush your wet beard, you may notice an increase in hairs on the brush. Although a small amount of hair loss is normal, pulling out healthy hair is not.

If You're Interested...
My Top 6 Men's Grooming Christmas Gifts

For men who appreciate the art of looking good.

You might notice that when your beard is dry, some areas of your beard are shorter, fuzzier, or harder to style. These are hairs that have been broken from brushing a wet beard.

So, when should you brush your beard?

Some people claim that it’s impossible to brush their beard when it isn’t wet. This is the number one reason most people give for brushing their beard in the shower.

It might seem easier and more convenient…until it damages your beard.

It’s much easier to prevent damage than it is to repair it. Brushing your beard at the correct time is essential to preventing this damage, and a vital step in making beard care easy.

The solution is simple – brushing your beard when it’s around 80% dry will ensure that the brush doesn’t damage your beard, and is still easy enough to glide through the hair. It won’t be so wet that it’s fragile, and it won’t be so dry that it’s challenging to style.

For those with more stubborn, curly beards, it is sometimes necessary to run through your beard with a wide-toothed beard comb before brushing. This will de-tangle the hairs, resulting in the brush gliding through your beard. Fewer snags equal fewer breakages.

Is there ever a good time to brush your beard in the shower?

As a general rule, you should never brush your beard in the shower. There are, however, certain circumstances where brushing a wet beard might not as harmful.

Whether you should brush your beard in the shower is dependent on how long your beard is, and what you’re using to brush it.

If you brush your short beard, it will not cause as much damage, as your facial hair consists mostly of new hairs.

But please don’t get me wrong. I’m not recommending that you do it, but just saying that it may not be as damaging at an early stage of growth.

If your beard is longer, there is never a good time to brush your wet beard. In saying that, chances are that brushing your beard in the shower on occasion won’t cause noticeable damage to your beard. The problem occurs when this is done frequently.

To be on the safe side, try your best to avoid brushing your beard in the shower entirely.

Move your brush out of the bathroom so you won’t be tempted, and remind yourself that using it will damage the beard you’ve spend months growing out.

The easiest way to stop this from becoming a habit is never to start doing it at all. If you’re new to beard care, try your best to avoid brushing your beard when it’s wet. Your beard will thank you for it.

What you use to groom your beard matters

Which tools you use to groom your beard is definitely a factor when it comes to brushing your hair in the shower.

Although brushing in the shower should generally be avoided, some products are more suited to brushing a wet beard than others.

They’re fantastic for your beard when it is dry, but when wet, the bristles can actually cause damage to your facial hair. Beard brushes are designed for use on dry or partially-damp hair and are not suited for use on fragile wet strands.

Even if you’re using a high-quality beard brush with natural bristles, using one on your beard in the shower can pull at your hair.

This can cause healthy hairs to be pulled out before they are ready. When hairs are removed prematurely, it can lead to areas of patchiness, split ends, and an overall harder to manage beard.

High-quality beard combs are specifically designed to prevent snagging. This means that it’s less likely that running these through your beard will result in breakage when wet.

However, only high-quality combs with wide teeth should be used for this purpose.

The last thing you want is to get your wet beard caught in a fine-toothed beard comb.

Again, combing through your beard in the shower should only be done when necessary, and ideally after beard wash has been applied.

The beard wash will help the comb glide through the hair and will even assist in distributing it evenly throughout your beard.

This is an option if you’re desperate to brush your beard in the shower. I never recommend brushing your beard with anything other than a boar bristle beard brush . But if shower-brushing is just too tempting, this is an option for you.

Shampoo brushes have silicone bristles that are specifically designed for use on wet hair. These brushes were initially intended for the hair on your head, but are most likely safe to use on hair all over your body.

As these brushes are designed for use in the shower, you can use them on your wet beard.

But, don’t expect the same results you would get from brushing a beard when it’s less wet. Plus, you will almost certainly still get some breakage – just not as much.

Why might you use a shampoo brush in the shower?

If you brush your beard in the shower as a way to lather your beard wash or shampoo, this might be a reasonable tool for you to use instead. Coupling a shampoo brush with beard wash can lead to a much more effective clean.

Plus, if you then intend on using a normal beard brush to formally brush it after it’s been towel-dried, the results are golden.

Using a shampoo brush on your beard can lead to a cleaner beard, as you can use it to lather the shampoo into your skin.

This leads to more dirt and grime being removed from your facial hair.

The silicone bristles of a shampoo brush also help to remove dead skin and hairs from the skin, without causing as much damage to the hair.

When dead skin is removed, you help clear the way for new hairs to grow. Because the hairs don’t need to break through layers of dead skin, your skin won’t itch or flake as much.

Beardruff is itchy and unsightly, so removing this from the equation makes beard growth a lot more comfortable.

Most people agree that grooming your beard with a bristle brush should not be done when it is wet, as wet hairs are more prone to breakage.

By following the advice in this article, you can avoid causing unnecessary damage. By avoiding simple mistakes like brushing your beard when it’s at its most vulnerable, you can keep your beard looking highly impressive.

link to Are Beards Professional? Everything You Need To Know

More and more men are choosing to grow a beard, something that was once considered highly unprofessional. But you may be wondering, are beards now considered...

Getting to grips with the terms used by barbers can be tricky and this leads to misunderstandings and mistakes. It’s important to know what you’re asking for. Here’s everything you need to...